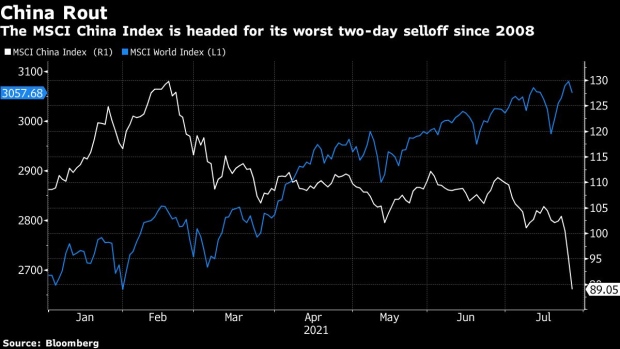 (Bloomberg) -- To emerging-markets veteran Mark Mobius, the Chinese government’s crackdown on some of the nation’s big companies may have a desired effect: boosting the prospects of smaller rivals.

Mobius, who spent three decades at Franklin Templeton before starting Mobius Capital Partners, said small- and medium-sized companies in the technology, education and medical industries are likely to see better growth prospects as a result of stepped-up regulatory scrutiny of the nation’s behemoths.

“What’s happening is a good thing,” Mobius said during an interview with Bloomberg Television. “What the Chinese government is doing is cracking down on the big companies that dominate various sectors at the exclusion of smaller companies. So the regulatory crackdown is probably in the long run going to be good for the Chinese market.”

The stepped-up regulation has battered the stocks of some major companies, driving MSCI China index down more than 11% this week, driving it toward the steepest two-day drop since the 2008 financial crisis. That came after China announced new regulations over the weekend for private education companies, seeking to reduce students’ workloads and overhaul a sector it said has been “hijacked by capital.”

The consumer sector, which includes giant like Alibaba Group Holding Ltd. and Tencent Holdings Ltd., is going to be hit by the reforms, Mobius said. While the selloff may extend another 5% to 10% at most, he said, investors will realize that not all companies are bound to be affected.

“There’s thousands of companies listed in China,” he said. “It’s a tremendous economy. There’s no way any global investor can ignore China, unless there’s a complete embargo of the U.S. government against China. But that’s very unlikely.”