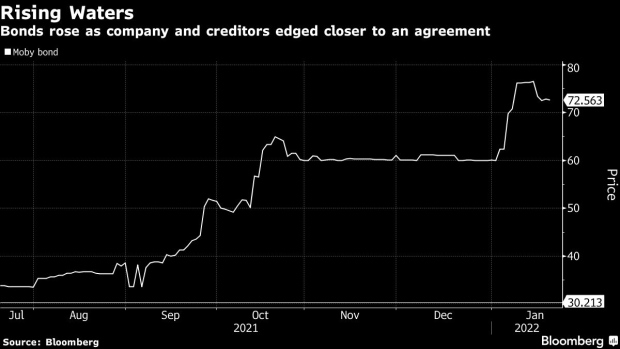 (Bloomberg) -- A group of Moby SpA’s bondholders will take a stake in a newly formed unit of the company as part of a long-awaited restructuring deal.

Investors including BlueBay Asset Management and Cheyne Capital Management will get equity in a unit that will own the ferry operator’s fleet, according to people familiar with the deal who asked not to be identified because the details are private. The group of bondholders reached an agreement with banks and owners late on Wednesday, ending two years of fractious negotiations and multiple lawsuits.

As part of the restructuring plan, some of the bondholders will inject more than 50 million euros ($57 million) to recapitalize the business in exchange for a stake in the new unit, the people said. A spokesperson for Moby declined to comment on the details of the proposal.

Moby, owned by the Onorato family, connects Italy’s main ports to its islands. It has been under pressure from increasing regulation, tougher competition and weak freight traffic volumes in the last years, and was further hit by the pandemic travel restrictions.

In June 2020, the company filed for a court-supervised restructuring procedure in Milan, but its revenue grew above expectations in the summer of 2021. It filed for Chapter 15 bankruptcy proceedings in the U.S. on Saturday as it prepared to close the deal at home.

Investors that contribute to the new money injection could recover more than 90% of their bond investment, the people said, adding that it’s significantly higher than what originally offered under a plan agreed in March 2021. A year ago, Moby’s 300 million-euro bond was indicated at about 25% of face value, according to data compiled by Bloomberg.