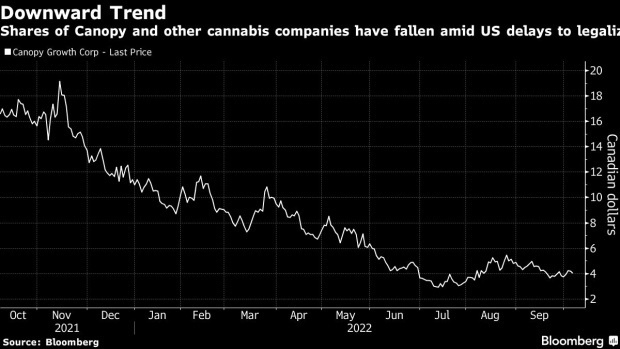 Marijuana plants grow in the Mother Room at the Canopy Growth Corp. facility in Smith Falls, Ontario, Canada, on Tuesday, Dec. 19, 2017. Canadian medical marijuana is setting the stage to go global. The country's emerging legal producers have a chance to seize opportunities in other countries that could make them worldwide leaders, according to Canopy Growth Corp. Chief Executive Officer Bruce Linton. , Bloomberg

(Bloomberg) -- Modelo beermaker Constellation Brands Inc. took a nearly $1.1 billion charge related to its stake in Canopy Growth Inc. in the second quarter -- but still sees catalysts that could lead it to boost investment in the marijuana industry.

Constellation’s stake in the Canadian cannabis producer gives it an option to swoop into the space if US federal laws change, due to Canopy’s deals with US companies such as Acreage Holdings Inc., TerrAscend Corp. and Wana Brands that would trigger upon legalization. While Canopy’s shares have lost about two thirds of their value this year amid delays to US legislation, Constellation doesn’t plan any changes in its Canopy investment and supports the company’s strategy, executives said Thursday during a conference call.

“We are happy with the position that Canopy has in the US and with the improvements that they’re making in Canada,” Constellation Chief Financial Officer Garth Hankinson said. He cited Canopy’s plans to restructure Canadian operations, its choice of brand investments, and continued hope that the US will federally legalize marijuana, or allow banks to work with the industry.