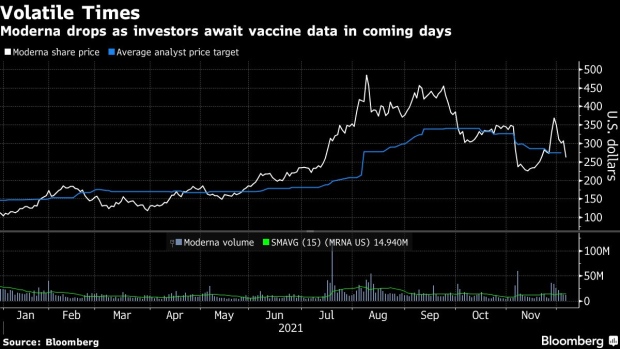 (Bloomberg) -- Moderna Inc. is down as much as 16% on Monday, making it the worst performing stock in the S&P 500 Index, a troubling turn for the vaccine maker that led the benchmark just last week.

It’s the biggest drop in a month for Moderna, and it comes as investors weigh the risks of the omicron variant against a broader economic reopening. The U.S. Centers for Disease Control and Prevention signaled hope that existing vaccines could work on the virus variant, while country’s virus expert, Anthony Fauci, said in a CNN interview that the severity of illness may not be as bad as feared.

“It may decrease the need for annual boosting if the severity is no worse and we move somewhat closer to this elusive herd immunity,” Oppenheimer & Co. strategist Jared Holz said in an interview.

Moderna’s much debated valuation is complicated by the market’s inability to determine how long the pandemic will last and what the demand for vaccines will look like. Still, this selloff is surprising since much of the U.S. population is still in need of the original vaccine regimen or a booster -- and none of the recent updates indicate that vaccines sales will slow anytime soon, Holz said.

The leading vaccine makers, Pfizer Inc. and BioNTech SE, are expected to have new data about treating the variant potentially by the end of the week, and Moderna is expected to follow shortly after that, according to Asad Haider, a strategist with Goldman Sachs.

“The major question is whether boosting with existing vaccines will be effective in providing protection, particularly in the context of waning immunity,” Haider wrote in a note to clients. Until we have those results, stock sentiment may be tied to updates on transmission of the new variant, he added.

Other companies working on new shots are also slumping. Vermont Senator Bernie Sanders further fanned the flames when he tweeted on Sunday that gains by Pfizer and Moderna stockholders are “obscene.” Pfizer fell as much as 4.2%, while BioNTech tumbled 20%. The Nasdaq Biotech Index, where Moderna comprises the third highest weighting, is on track to close at the lowest since November 2020.