Which Vaccine Has the Highest Efficacy Against Delta?

Moderna Inc. joined the S&P 500 on Wednesday as the index’s the best performing stock this year -- by a mile.

The move caps the drugmaker’s transformation from an early-stage biotech to a vaccine maker supplying COVID shots to the world. With a gain of just over 207 per cent so far in 2021, Moderna’s share performance tops the index’s existing leader, L Brands Inc., which has risen about 104 per cent.

In the runup to its inclusion in the U.S. benchmark, Moderna’s stock has made fresh highs advancing more than 30 per cent over four sessions before a 2 per cent dip on Tuesday. Its shares closed 4.5 per cent higher at US$321.11, another record, with a market value of about US$129 billion. 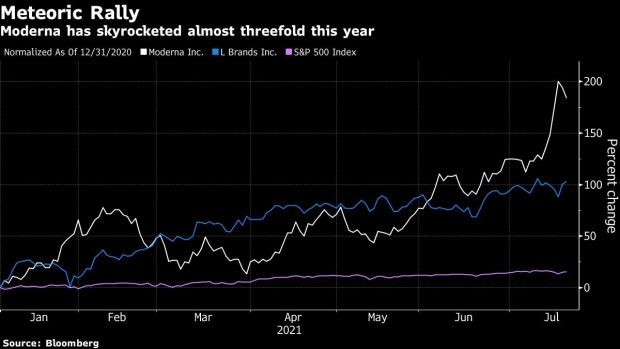 Moderna’s rise has come largely from its innovations in developing messenger RNA vaccines, which use the body’s cells as mini vaccine factories. That has led some Wall Street analysts to call it the “Tesla of biotech” because the Cambridge, Massachusetts-based company is charting a course that may change the way infectious diseases are treated.

The company secured its place in the upper echelons of U.S. biotechs next to AbbVie Inc. and Amgen Inc. -- after receiving emergency authorization for its COVID-19 vaccination last December, just a week behind Pfizer Inc. and BioNTech SE.

But the parallels with Tesla don’t necessarily bode well for Moderna’s stock. Since the day before Tesla’s inclusion in the benchmark in December, it has fallen about 6 per cent versus the index’s gain of nearly 18 per cent. Other recent additions to the index have also underperformed.

Shares of companies entering the index typically rally ahead of the inclusion as investors adjust their portfolios. Moderna’s shares were already losing steam on Tuesday, closing 2 per cent lower at US$307.33. 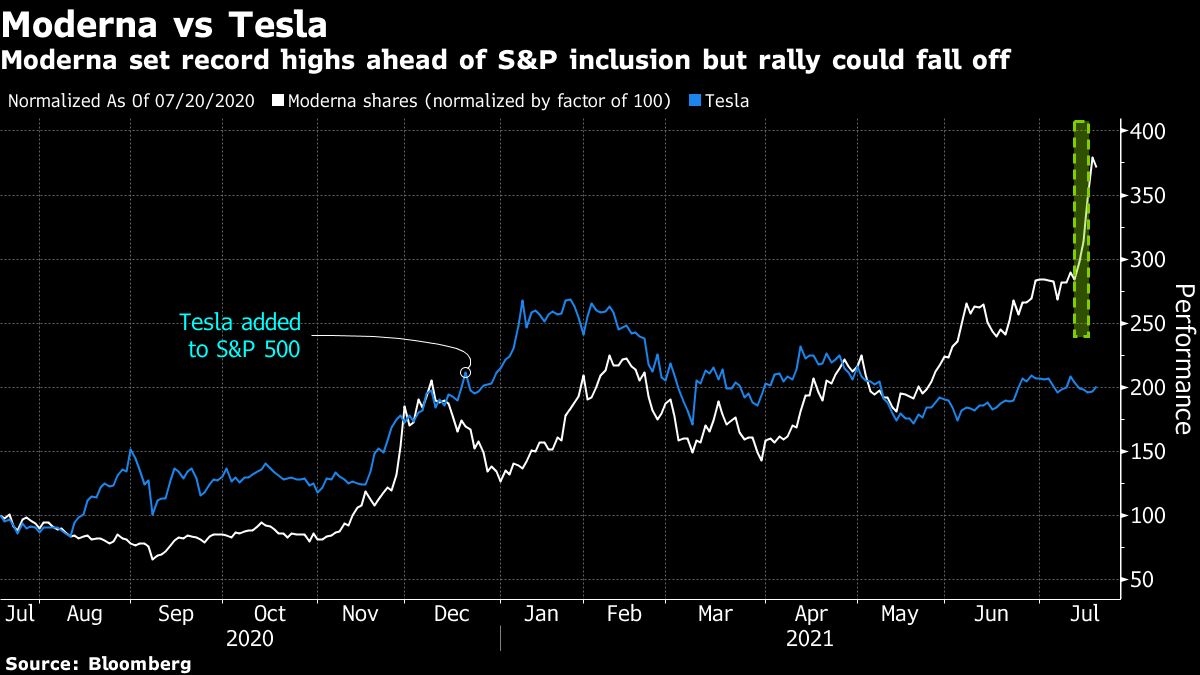 Skeptics of Moderna’s surge in recent months note that its pipeline is in the early stages of human testing while the market for COVID-19 booster shots isn’t yet fully understood.

Still, recent lab results show Moderna’s jab produces antibodies against the COVID-19 Delta variant. Analysts at Goldman Sachs also predict Moderna could have a new flu shot on the market by 2023 and a combination of a flu and COVID-19 vaccine as soon as 2024. The company also is working on new vaccines and medicines for cancer and HIV as well as Zika and heart disease.

A survey of 191 hedge funds and institutional investors from Jefferies trading desk indicated that roughly 73 per cent of respondents expect Moderna shares to be little changed or to fall 20 per cent or worse into year end. The investors were most keenly focused on a delta booster and flu shot results, while only 13 per cent were long Moderna.

“In the end, we still have no idea who is buying the stock,” Will Sevush, a strategist with Jefferies wrote to clients, “bulls are very few and very far between.”

Sales of mRNA-1273, as Moderna’s COVID inoculation is called, are likely to beat Wall Street consensus for US$18.1 billion in 2021, according to Goldman. But even the Wall Street high price target of US$299 from Moderna’s biggest enthusiast -- Goldman analyst Salveen Richter -- implies further retreat.