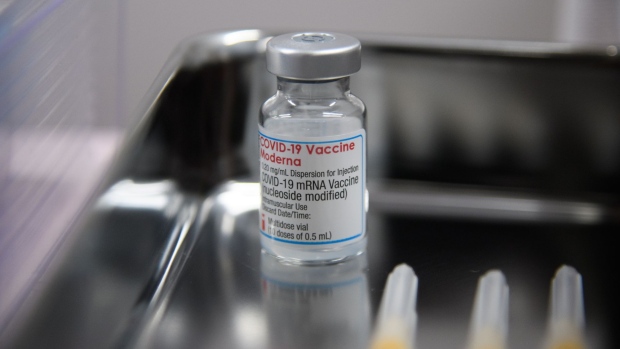 A vial of the Moderna Inc. Covid-19 vaccine at a vaccination site set up at Haneda Airport in Tokyo, Japan, on Monday, June 14, 2021. Japanese Prime Minister Yoshihide Suga said during a parliamentary debate last week that he wants to finish inoculating everyone in the country who’s willing to get a Covid-19 vaccine by October or November, citing progress made in the vaccination drive so far. , Bloomberg

(Bloomberg) -- Moderna Inc. said that a new analysis of the late-stage clinical trial of its Covid-19 vaccine found a higher rate of breakthrough cases in people who got shots early in the study.

The analysis, detailed in a news release from Moderna on Wednesday, examined instances where immunized people in the company’s trial still contracted Covid-19 this summer, when the delta variant was surging.

In Moderna’s trial, people who first received a placebo were offered the vaccine starting in December, after initial positive efficacy results were reported. That created a group who were immunized a median of five months later than those who got the vaccine from the start of the study.

The company said it found that people who received the vaccine earlier had more than a 50% higher rate of symptomatic breakthrough infections in July and August, compared with those who were inoculated later.

The unpublished analysis is from the so-called open-label portion of Moderna’s trial, after the participants who had been given a placebo were offered the actual vaccine. Since the trial is no longer blinded, this type of additional analysis is considered less rigorous than the original study.

Moderna has asked the U.S. Food and Drug Administration to authorize a third-dose booster shot at one-half the dose of its existing vaccine.

“The increased risk of breakthrough in this analysis quantifies the impact of waning immunity” in the study, Moderna said in its statement. “This adds to evidence of potential benefit of a booster dose.”

It isn’t clear how soon the FDA could decide on Moderna’s application. Advisers to the agency are scheduled to weigh a potential booster for the Pfizer Inc.-BioNTech SE Covid vaccine, which uses similar technology, on Friday. In briefing documents for the meeting posted online Wednesday, the agency gave little clue which way it was leaning.

Moderna said the analysis has been submitted to a preprint website and will be submitted for formal publication in a medical journal.