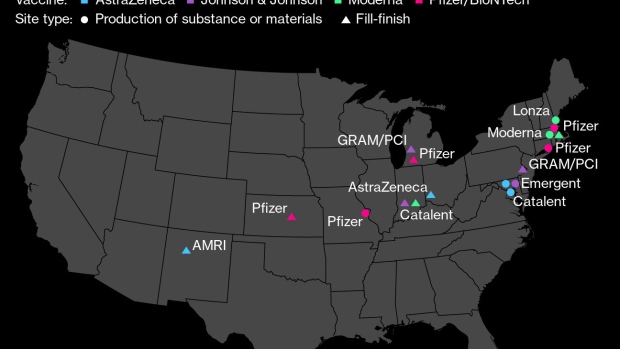 A healthcare worker takes a syringe with the Moderna Covid-19 vaccine to administer at a walk up vaccination site in San Francisco. Photographer: David Paul Morris/Bloomberg , Bloomberg

(Bloomberg) -- Moderna Inc. has received positive feedback from U.S. regulators on a proposal to expand the number of doses of its Covid-19 vaccine in each vial, the company said, a move that could help expand supplies.

In prepared testimony for a Congressional hearing on Tuesday, Moderna said the U.S. Food and Drug Administration could allow it to put as many as 15 doses of its Covid-19 shot into each vial. Currently, its vials hold 10 doses.

The House Energy and Commerce Committee is scheduled to hold a hearing of Covid-19 vaccine manufacturers, including Moderna, Pfizer Inc., Johnson & Johnson, AstraZeneca Plc and Novavax Inc., to discuss expanding the availability of shots.

Discussion between Moderna and the U.S. government about increasing the number of doses per vial began with the Trump administration’s Operation Warp Speed program, according to its former Chief Scientific Adviser Moncef Slaoui.

By making each vial more efficient, Slaoui said, Moderna will be able to circumvent some of the headwinds faced in the last stage of the production process, known as fill-finish, where the vaccine’s substance is placed in vials, packaged and distributed.

Pfizer, which produces a similar vaccine to Moderna’s, has already gotten a green light from regulators to extract an additional dose from each of its vials. In the wake of the change, the company increased its expected output for the year by 50%.

Pfizer said in testimony prepared for the hearing that it expects to produce 13 million vaccine doses a week by the middle of March, higher than previous projections.

On Tuesday, vaccine makers are expected to discuss other ways to increase supply, such as reaching agreements with contract manufacturers and creating partnerships across the industry to secure additional capacity.

With the exception of Pfizer, all the companies that will be present at the Congressional hearing received funding from Operation Warp Speed to accelerate vaccine development and manufacturing and secure supply. Pfizer and German partner BioNTech SE rejected U.S. capital for research and manufacturing, while still reaching supply agreements with the government.

To date, U.S. regulators have only authorized the Moderna and Pfizer-BioNTech shots, both of which require two-dose regimens. A total of 63.1 million doses have been administered, according to Bloomberg’s vaccine tracker, and more Americans have now received at least one dose than have tested positive for the virus since the pandemic began.

However, as second doses are coming due, state health systems have been strained for supply, leaving some without complete immunizations.

Both the Trump administration and Biden administration have employed a Cold War-era law known as the Defense Production Act to help secure materials to accelerate production of the Pfizer-BioNTech shot, among others. On Friday, Pfizer CEO Albert Bourla announced the company was on-boarding new production facilities and suppliers of materials.

Supply constraints exacerbated by the logistical challenge of the two-dose regimens could be improved by new entrants. J&J’s vaccine candidate requires only a single shot, and could be authorized for emergency use within a week. A group of independent advisers to the FDA will review data on the vaccine at a public meeting on Friday.