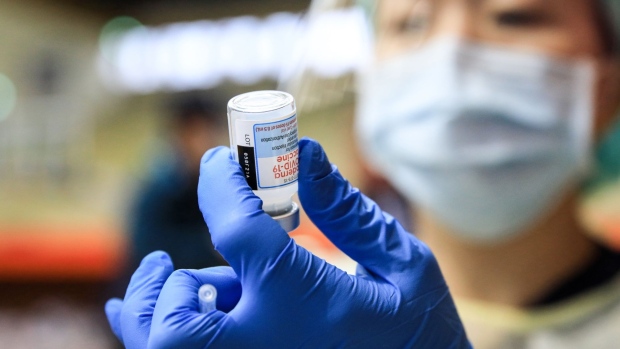 A healthcare worker prepares a dose of Moderna Covid-19 vaccine booster shot at a vaccination center in Keelung, Taiwan, on Wednesday, Jan. 12, 2022. Interval between the second jab and booster shot is shortened to 12 weeks from five months, Taiwan's health minister Chen Shih-chung said at a briefing on Jan. 7. , Bloomberg

(Bloomberg) -- Moderna Inc. enrolled the first participant in a clinical trial of its omicron-specific vaccine booster, another step toward fighting the highly transmissible variant that’s spread around the world in a matter of weeks.

Moderna and rival Pfizer Inc. are each rushing to test omicron-specific vaccines in case they are needed as the variant continues to pummel the globe. Moderna’s statement on the new trial comes just one day after Pfizer said it had began a 1,400-person study of a messenger RNA shot targeted against omicron.

Vaccine makers are grappling with what kinds of shots may be most effective as the coronavirus continues to mutate. Omicron-specific boosters are one possibility; another is a multivalent vaccine that would induce protection against multiple strains. Other strategies include broad-acting vaccines that would work against even more mutations.

Moderna is testing the omicron-targeted booster because of “the long-term threat demonstrated by omicron’s immune escape,” Chief Executive Officer Stephane Bancel said in the statement. “We are also evaluating whether to include this omicron-specific candidate in our multivalent booster program.”

In the same statement, the company said it was reassured by a report in the New England Journal of Medicine showing that patients who had received three doses of Moderna’s existing vaccine still had neutralizing antibodies against omicron six months after the third shot. However, after the booster, levels of omicron-fighting antibodies declined faster than those against the original virus strain.