Moderna Inc. said its COVID-19 vaccine was 94.5 per cent effective in a preliminary analysis of a large late-stage clinical trial, another sign that a fast-paced hunt by scientists and pharmaceutical companies is paying off with potent new tools that could help control a worsening pandemic.

The highly positive readout comes just a week after a similar shot developed by Pfizer Inc. and BioNTech SE was found to be more than 90 per cent effective in an interim analysis. Both shots rely on a technology called messenger RNA that has never been used to build an approved vaccine. Soon, millions of people around the world could be spared from illness by the breakthroughs.

A preliminary analysis of data from more than 30,000 volunteers showed Moderna’s vaccine prevented virtually all symptomatic cases of COVID-19, the disease caused by the coronavirus, the company said in a statement on Monday.

Moderna shares rose as much as 15 per cent in New York. The rally in global shares following the news represented about US$332 billion in market value added to the MSCI All Country World Index

The vaccine also appeared to be effective in preventing the most serious COVID-19 infections. There were no severe cases among people who got the vaccine, compared with 11 in volunteers who received placebo shots, according to Moderna’s statement.

“The thing that got me the most excited today was the severe disease,” Moderna Chief Executive Officer Stephane Bancel said in an interview. “That for me is a game-changer.”

The results arrive at a moment when the pandemic’s grip is tightening. The U.S. surpassed 11 million coronavirus cases Sunday as Florida reported the most new infections since July and new cases in California hit a three-month high. Deaths and hospitalizations are also rising. Europe has also seen cases soar as much of the world braces for what is expected to be a dire winter.

While the results are preliminary, both Moderna and Pfizer are expected to seek emergency-use authorization from the U.S. Food and Drug Administration if further study shows their vaccines are safe. In its statement, Moderna said it could seek a go-ahead from regulators in the coming weeks. 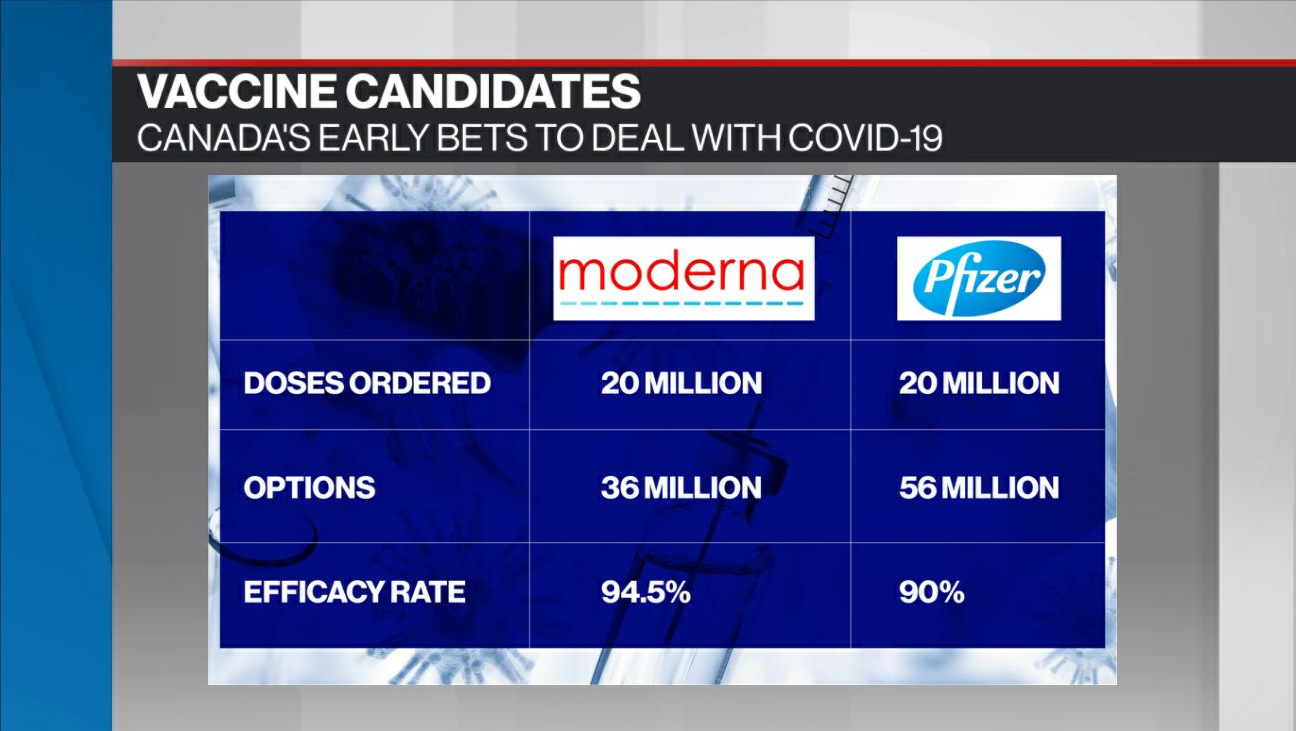 “The results of this trial are truly striking,” said Anthony Fauci, director of the National Institute of Allergy and Infectious Diseases, on a conference call with reporters. The efficacy against severe disease “is really quite impressive.”

The company said it would expect an emergency authorization to be based on a final analysis containing 151 cases, along with two months of safety follow-up data that U.S. regulators want to see. That final data is expected later this month.

Cambridge, Massachusetts-based Moderna received US$955 million from the U.S. Operation Warp Speed program to develop its vaccine, and the U.S. has agreed to pay up to US$1.53 billion to purchase supply of the shot. Pfizer has said it didn’t receive any federal funding to develop its vaccine, though it has struck a supply agreement with the U.S. worth nearly US$2 billion.

Once a vaccine is cleared, distribution is expected to be a significant challenge. Handling some of the shots that are being studied is complicated: For example, Pfizer’s must be stored at ultra-cold temperatures until a few days before it is used, a requirement that adds logistical hurdles for states that will be in charge of overseeing the inoculation effort.

Moderna said on Monday that new stability data showed its vaccine is stable at refrigerator temperatures for 30 days, much longer than a previously estimated seven days. For longer-term storage, it can be kept in freezers, though it doesn’t need the special facilities required for the Pfizer vaccine.

Both the Moderna vaccine and Pfizer’s are based on mRNA technology designed to transform the body’s own cells into vaccine making factories. Once injected, the vaccines instruct cells to make copies of the coronavirus’s spike protein, stimulating the creation of protective antibodies.

The analysis of Moderna’s data found no significant safety concerns, the company said. It said some participants had severe fatigue, muscle pain, joint pain and headaches after getting the vaccine, though the side effects were generally short-lived.

Bancel said the data safety monitoring board met at 10 a.m. on Sunday and he anxiously checked his email every five minutes until he heard in the early afternoon they had results, and got on a video call to hear them.

The result “is a big milestone” for messenger RNA technology, Bancel said. “It shows that mRNA can be a drug.”

In vaccine trials, a certain number of volunteers -- a percentage of whom get a placebo -- have to get infected in order to determine if the vaccine works. That’s easier to accomplish with the pandemic in the U.S. surging. The U.S. has recorded more than 100,000 new infections every day since Nov. 5, according to Johns Hopkins University data compiled by Bloomberg.

The same explosion of COVID-19 cases that helped Pfizer get results for its vaccine trial on Nov. 9 helped speed along Moderna’s trial. Moderna on Nov. 11 said its study had accumulated more than 53 infections, allowing a preliminary analysis to begin.

Infections were accumulating so fast in the trial that Moderna’s analysis ended up being based on 95 cases, the company said.

Bancel said at the rate cases are piling up Moderna should get the final 151 cases by the end of the month, allowing it to complete a final analysis and file for emergency use authorization.

Moderna’s final-stage trial started on the same day as Pfizer’s in late July. The company was slightly behind Pfizer largely due to structural differences in the studies. The two doses of Moderna’s vaccine are given four weeks apart; Pfizer’s two doses are given over three weeks.

--With assistance from Blaise Robinson and Dave Merrill.