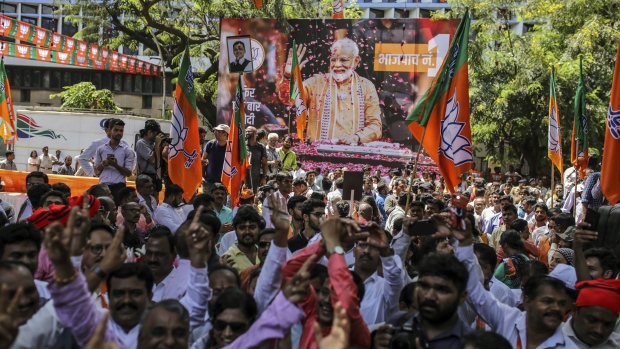 Indian Prime Minister Narendra Modi has surged to a majority on his own in India’s general election, with his Bharatiya Janata Party establishing a commanding lead in vote counting.

"India wins yet again," Modi said in a tweet. "Together we grow. Together we prosper. Together we will build a strong and inclusive India."

Together we will build a strong and inclusive India.

BJP supporters have begun celebrating in the streets as the party extended its lead in more than 299 seats — easily ahead of the 272 seats needed to form government and more than the 282 the party won in 2014. The opposition Congress party is ahead in 51 seats, official election commission results show as of 2:46 pm local time.

After the initial euphoria over the prospects of a landslide victory, gains in Indian assets are evaporating fast. The Sensex, the benchmark equity index, is close to erasing its climb to a record.

The outcome is a validation of Modi’s hardline Hindu nationalism and populist economic policies, and a major setback for Congress leader Rahul Gandhi, whose party has failed to make significant inroads following its trouncing in the polls in 2014, when it won just 44 seats.

"This is clearly a victory not just of the leadership of Prime Minister Modi, we attribute it to the work that he did over the last five years," BJP spokesman Nalin Kohli said on NDTV. "This is a pro-incumbency vote and it hasn’t happened in a very, very long time in this country."

The Election Commission of India began counting Thursday after a six-week-long process that began on April 11. India uses electronic voting machines, so counting should be completed on the same day. There’s roughly 900 million registered voters and with turnout at around 67 per cent, that’s more than 600 million people casting ballots.

Ahead of counting, opposition leaders — as well as the country’s former president — raised questions about the integrity of the electronic voting machines. The agency has rejected these accusations, but complaints may continue as results roll in.

Nearly all exit polls predicted Modi’s BJP and its allies in the National Democratic Alliance would sweep to a comfortable victory over the rival Congress party and its United Progressive Alliance.

The election in India, the world’s fastest-growing major economy, took place amid rising concerns about unemployment, protests by impoverished farmers and in the wake of a deadly suicide bombing and military confrontation with Pakistan that darkened the national mood. Campaigning quickly got ugly, with Modi calling an assassinated former prime minister corrupt and rival political party supporters clashing violently in eastern India.

But it appears the farming community’s fury over depressed crop prices and high levels of debt didn’t affect the BJP’s vote — the party is leading in most of the agriculture-dominated states according to election commission figures.

Under the BJP, the government has launched sprawling welfare programs to benefit the poor and surprised markets by sparring with central bank chiefs and eradicating 86 per cent of currency overnight. His government gradually pivoted to a more populist economic program after launching structural reforms, such as a landmark goods and services tax.

Modi’s government has also adopted a more muscular posture toward rival Pakistan, eventually launching retaliatory air strikes after attempting diplomatic outreach to Islamabad earlier in its tenure. Indian troops also faced off against China in the Himalayas before orchestrating a detente with President Xi Jinping.

If Modi is returned to power, he’ll likely spend the next five years focusing on the promises he made in 2014 that targeted the aspirations of the middle class and business community, said Sandeep Shastri, a political scientist and Pro Vice Chancellor at Jain University in Bangalore.

"While they will continue to have the pro-poor stance that they’ve followed for the last five years, I think they’ll expand their bag of policies to focus much more on the middle class, the upper middle class and the business class," Shastri said.

With assistance from Bibhudatta Pradhan and Archana Chaudhary