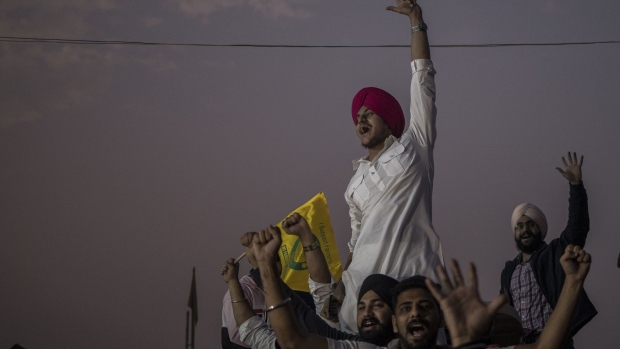 Workers weigh a sack of wheat at the Dankaur Grain Market in the Gautam Buddh Nagar district of Uttar Pradesh, India, on Tuesday, April 21, 2020. The farm sector is likely to be the lone bright spot for India's stalled economy as Prime Minister Narendra Modi crafts a plan to exit the world’s biggest lockdown and revive stalled economic activity. , Bloomberg

(Bloomberg) -- Indian Prime Minister Narendra Modi’s surprise move to scrap three contentious farm laws may not be enough to stem a yearlong protest movement by farmers, with the two sides yet to close the gap on another crucial issue -- guaranteed prices for crops.

The protesters plan to march to the capital New Delhi on Monday, when parliament reconvenes for its winter session, to push ahead with their demands that include setting up of a mechanism to ensure farmers get minimum support rates for all harvests.

India currently fixes the rates for two dozen farm commodities, including some grains and pulses, and procures limited volumes for its welfare programs at those levels. Private players buy agricultural goods at market-determined prices.

The government has said it will form a group to find ways to make the system “more effective,” but that’s not enough for the protesters. They demand a new law to make it illegal to buy crops below the state-set prices.

“We are not fond of sitting on the streets,” Samyukt Kisan Morcha, an umbrella group of farmers’ associations, said in a letter to Modi dated Nov. 21. “We too desire that after resolving these other issues as soon as possible, we return to our homes, families and farming. If you want the same, then the government should immediately resume talks.”

The farmers’ continued anger could carry a political cost for Modi, who announced his biggest policy reversal since assuming power in 2014 by scrapping the farm laws earlier this month ahead of some state elections. It could dent Modi’s image as a strong and decisive leader.

Analysts say that establishing a price guarantee system for agricultural goods would be impossible, both logistically and fiscally, given India’s annual output of food grains alone of about 300 million tons, the risk of inflation and the government’s stretched budget due to the pandemic.

“The real reason behind the farmers’ demand is their desire for some stability and certainty in their incomes,” said Shoumitro Chatterjee, assistant professor of economics at Pennsylvania State University. But given India’s budget situation, providing such income certainty via a guaranteed price at the national level may be infeasible, he said.

Modi’s retreat on farm laws has already cast a shadow on the pace of reforms that his administration had promised. Farmers form a powerful voting bloc in the country, where agriculture supports about 60% of its 1.4 billion people.

“Our agriculture sector is crying for massive reforms,” said Atul Chaturvedi, president of the Solvent Extractors’ Association of India. “Current high MSP can never be sustainable as it would hurt consumers big time.”

The government buys mainly rice and wheat for its welfare programs, mostly from states such as Punjab, Haryana and Madhya Pradesh. Any rise in government purchases would worsen an already wide fiscal deficit, seen at 6.8% of India’s GDP in 2021-22.

Buying more at government-set prices could cause the food subsidy bill, which may exceed $33 billion in 2021-22, to balloon further. It could also lead to over-production of crops in India, the world’s biggest grower of cotton and the second-largest producer of wheat, rice and sugar.

“Now we are in a phase where our problem with food is efficient management of surplus,” said Suyash Rai, deputy director and fellow at Carnegie India. If more and more is bought through the public-procurement system, “how will we handle that?”

But farmers say the government only buys from a few states that have good transport network. Price instability is the biggest concern in India, where 86% of farmers cultivate plots of about 2 hectares (5 acres) or less.

“The government procures only in Punjab, Haryana and Western Uttar Pradesh. That too only rice and wheat. So farmers everywhere sell to traders at a lower price,” said Ashok Dhawale, president of the All India Kisan Sabha, a group representing farmers. “The MSP has meaning only when there is a government procurement machinery,” he said.