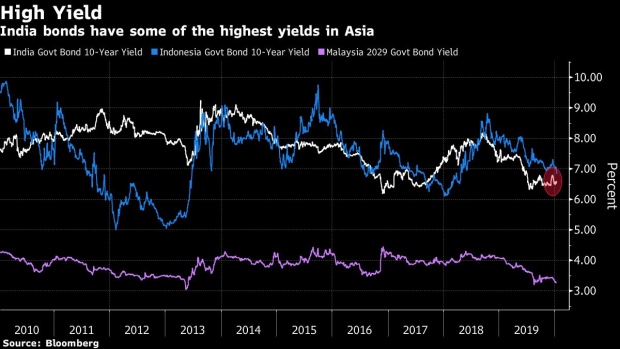 Cyclists and motorists travel along a near a gate to the Imambara Husainabad in Lucknow, Uttar Pradesh, India, on Monday, Dec. 30, 2019. Uttar Pradesh -- a state with more people than Russia in which Muslims make up almost a fifth of the population -- has seen some of the most intense clashes over a new religion-based citizenship law. Passed on Dec. 11 in a parliament controlled by Prime Minister Narendra Modi’s ruling party, it gives preference to undocumented migrants of all faiths except Islam from neighboring Afghanistan, Pakistan and Bangladesh to seek Indian citizenship. Photographer: Prashanth Vishwanathan/Bloomberg , Bloomberg

The $453 billion investor, an affiliate of Legg Mason Inc., is diverting some of its funds into longer-dated Malaysian and Chinese debt, according to Desmond Soon, head of investment management for Asia ex-Japan. It has an overweight position in India bonds.

The initial market euphoria from Prime Minister Narendra Modi’s re-election last year is wearing thin as economic growth stutters and a policy making it harder for Muslim migrants to get citizenship stirs protests. Foreign holdings of Indian sovereign debt have dropped to near a three-month low.

“It certainly distracts Prime Minister Modi’s government from making the necessary economic policy and reform to focus on the economy,” Soon, a 30-year investment veteran, said in Singapore. “We are in the process of reducing India somewhat.”

Angry protests have erupted in many Indian states, forcing the government to send in hundreds of soldiers to aid local police. Modi also stoked tension in Kashmir, the nation’s only Muslim-majority state, when he ended seven decades of autonomy for the area in 2019.

The changes, part of the election promises made by Modi’s Hindu nationalist government, have created mistrust among Muslims, who form about 14% of the population.

Despite five interest-rate cuts last year to shore up growth, yields on 10-year India bonds remain some of the highest in Asia at 6.66%.

A recent rally in the market, spurred by bond purchases from the Reserve Bank of India, has stalled as inflation surges to a five-year high. Stagflation looms as the economy grinds toward its slowest expansion in more than a decade.

Gobal investors may also pour another $150 billion to $200 billion into Chinese bonds as the debt is gradually included in global benchmarks, he said.

--With assistance from Chester Yung.

To contact the editors responsible for this story: Tan Hwee Ann at hatan@bloomberg.net, Cormac Mullen