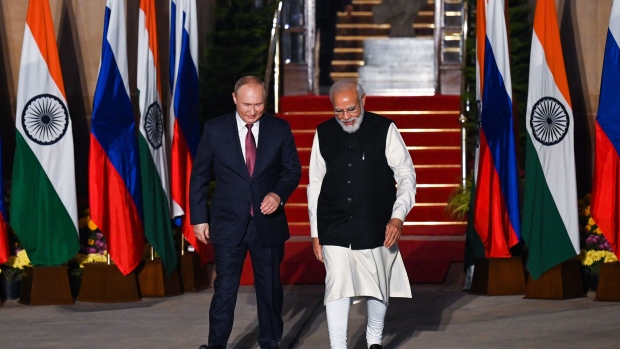 (Bloomberg) -- Indian Prime Minister Narendra Modi won’t be holding an annual in-person summit with Vladimir Putin after the Russian president threatened to use nuclear weapons in the war in Ukraine, according to people with knowledge of the matter.

The relationship between India and Russia remains strong but trumpeting the friendship at this point may not be beneficial for Modi, said a senior official with knowledge of the matter, who asked not to be named due to the sensitivity of the issue.

It would mark only the second time the leaders of India and Russia haven’t met face to face since 2000, when the relationship was elevated to a strategic partnership. The summit, usually held in December, was canceled just once in 2020 at the height of the pandemic.

India’s decision was clear at a regional summit held in September in Uzbekistan, when Modi urged Putin to seek peace in Ukraine, said a Russian official familiar with the preparations, who asked not to be identified to discuss matters that aren’t public.

Publicly, the Kremlin has touted India as a key country that hasn’t joined the international criticism over the invasion of Ukraine and pushed to step up trade as sanctions have cut off flows with the US and Europe.

A spokesperson for India’s Ministry of External Affairs didn’t respond to an emailed request for comment.

India is quietly scaling back engagement as Russia’s war in Ukraine is well into its 10th month, fueling a surge in energy and food prices. Modi’s government is trying to balance between Moscow, a key provider of weapons and cheap energy, and the US and its allies, which have imposed sanctions and price caps on Russian oil.

Since Russia’s invasion began, India has been one of the biggest swing nations. Modi’s government abstained from United Nations votes to condemn Putin’s war and held back from participating in US-led efforts to sanction Moscow, using the opportunity to snatch up cheap Russian oil.

But it has come under pressure from the US and other nations India has aligned with to counter China’s growing assertiveness along its Himalayan border. The US recently approved a package to upgrade the F-16 fighter jet fleet of India’s historic rival, Pakistan, a move New Delhi strongly opposed.

India also angered Japan by joining the Russia-led Vostok-2022 war games held around a group of islands known as the southern Kurils in Russia and the Northern Territories in Japan — a territorial dispute that dates back to the end of World War II. While India didn’t take part in the naval exercises, ties have been tested.

In an editorial earlier this month marking India taking over the presidency of the Group of 20 nations, Modi made a veiled reference to Russia’s war.

The world remains “trapped in the same zero-sum mindset,” Modi wrote in the Times of India newspaper. “We see it when countries fight over territory or resources. We see it when supplies of essential goods are weaponised.”