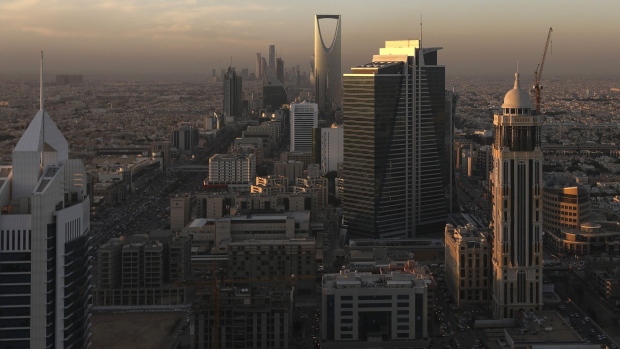 The Kingdom Tower, center rear, stands as automobile traffic moves along the King Fahd highway, left and Olaya Street, right, in Riyadh, Saudi Arabia, on Thursday, Dec. 1, 2016. Saudi Arabia is working to reduce the Middle East’s biggest economy’s reliance on oil, which provides three-quarters of government revenue, as part of a plan for the biggest economic shakeup since the country’s founding. , Bloomberg

(Bloomberg) -- Moelis & Co. will soon hire staff in Saudi Arabia as it sees the kingdom attracting more foreign investors and benefiting from an “energy supercycle.”

The boutique financial adviser, founded by Wall Street veteran Ken Moelis, wants to open an office in Riyadh, the Saudi capital, and do more deals as the world’s biggest oil exporter privatizes some companies and the stock market sees a burst of initial public offerings.

“We are waiting for a final stamp on our license,” Vice Chairman Eric Cantor said in an interview. “It’s forthcoming and part of that is hiring Saudis.”

He declined to say how many people the bank wants to employ.

The Saudi economy, the biggest in the Middle East, is growing at its fastest pace in almost a decade thanks in large part to crude prices surging this year to around $80 a barrel. They could go even higher, Cantor said, because many countries are cutting back on fossil-fuel investments to meet climate goals.

“We are set for a supercycle in oil and gas,” said Cantor, who was the majority leader for the Republicans in the House of Representatives until 2014, after which he joined Moelis.

Crown Prince Mohammed bin Salman is trying to diversify the economy from oil and develop industries from artificial intelligence, to tourism and electric vehicles. That’s led to more opportunities for foreign banks in the non-energy sector, even if the fees they get for deals are low by global standards.

“This region is one of the most dynamic places economically in the world right now because it’s really changing and it’s opening up,” Cantor said in Abu Dhabi, the capital of the neighboring United Arab Emirates. “There’s increasing interest from U.S. companies wanting to come to the region and Saudi Arabia’s the largest market.”

Moelis has done business in the Persian Gulf for years and its founder was dubbed “Ken of Arabia” after winning a mandate to work on Saudi Aramco’s record IPO in 2019. It was also hired by the state energy company to help it sell billions of dollars of assets, including pipelines.

Moelis, like many other international firms, has its main office for the Middle East in Dubai. The move to open one in Riyadh comes as Saudi Arabia pushes firms to locate their regional headquarters there.