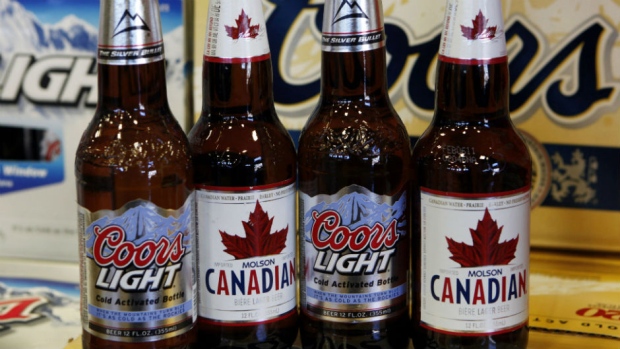 MONTREAL -- Molson Coors Brewing Co. had its worst trading day in more than a decade after the company widely missed expectations largely due to weakness in the United States.

The company's shares (TAP.N) sank more than 15 per cent to US$60.64 in trading on the New York Stock Exchange, hitting a nearly four-year low. That was the biggest one-day fall since April 2005.

The loss was less severe in Toronto where fewer of the company's shares are traded. The stock (TPXb.TO) closed down 6.7 per cent to C$93.51, one cent above a 52-week low.

The Denver and Montreal-based company said its sales fell 4.8 per cent to US$2.33 billion in the first quarter compared to the prior year quarter.

Sales in the U.S., which account for more than 70 per cent of global revenues, were down 5.8 per cent.

Canadian sales decreased 2.5 per cent to US$283.8 million. They were also down in Europe and international markets.

Net earnings attributable to shareholders were US$278.1 million or $1.28 per diluted share, compared with US$208.5 million or 96 cents per share a year ago.

The profits included a US$328-million gain from an adjustment on the purchase of Miller International and increased pricing.

Molson Coors CEO Mark Hunter tried to downplay the results, noting they came in a small quarter and as the entire U.S. beer industry had a softer-than-anticipated start to the year.

"We do not see these results as indicative of our full year performance versus our plan," he said during a conference call.

Excluding one-time items, adjusted earnings for the three months ended March 31 fell about 40 per cent to US$104.3 million or 48 cents per diluted share.

That compared with US$172.2 million or 80 cents per share in the prior year.

Molson Coors was expected to post 78 cents per share in adjusted earnings on US$2.45 billion in revenues, according to analysts polled by Thomson Reuters.

The company endured some unique challenges in the quarter, including delays in ramping up a new ordering system at a U.S. brewery, but the underlying beer trends in the U.S. really spooked the market, said analyst Brittany Weissman of Edward Jones.

"But it's an unforgiving market. There's some industry challenges and I think the reaction today reflects that."

Canadian pre-tax profits were US$9.1 million, down from US$20.9 million the prior year quarter when it gained US$8.1 million from a price adjustment on the sale of its stake in the Montreal Canadiens.

Molson Coors said Canadian volume decreases -- including Coors Light and Molson Canadian -- came in the backdrop of a weak industry in Western Canada and higher inventory levels in Quebec as it was in the midst of union contract negotiations.

Meanwhile, the brewer said it is preparing to introduce several new beers into Canada, including Coor's Edge, a non-alcoholic product. Other brands will be Leinenkugel Shandy and Henry's Hard Soda.