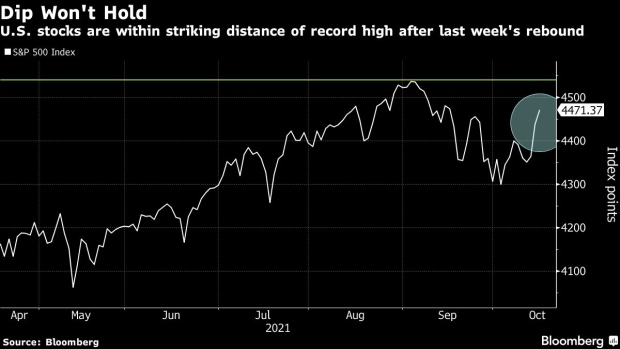 (Bloomberg) -- Retail investors keep on buying the dip, even as stock market fundamentals deteriorate, according to Morgan Stanley strategists.

The optimism of mom-and-pop traders is causing many institutional investors who share Morgan Stanley’s cautious view to “cover and chase,” strategists led by Mike Wilson wrote in a note. That’s keeping the S&P 500 index within striking distance of last month’s record, even as supply and cost issues appear to be more persistent for both businesses and the consumer, they said.

“This divergence between markets and confidence must be resolved over the next few months one way or another,” the strategists wrote.

Wilson has repeatedly forecast a 10% to 20% correction in U.S. stocks this year, as the macroeconomic outlook deteriorates. Though last week he gave some ground and pushed out out his prediction for a peak-to-trough decline of at least 10% for the S&P 500 from the fall to early next year.

While Morgan Stanley’s bearish view is shared by some strategists, such as Bank of America Corp., others including JPMorgan Chase & Co. and Goldman Sachs Group Inc. have said that concerns over stagflation are overblown and continue to recommend buying the dip.