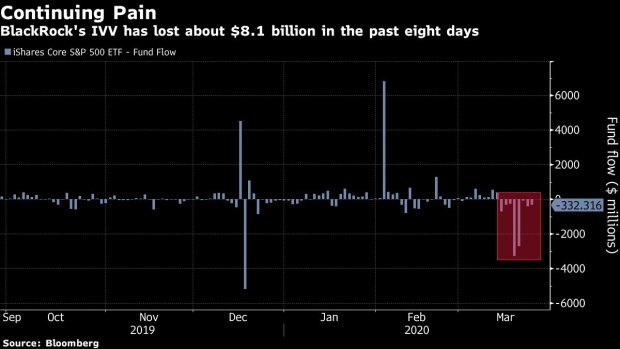 (Bloomberg) -- Their refusal to flinch as stocks plunged was the talk of the market for weeks, but now there are signs mom-and-pop investors may be losing some of their resolve.

Exchange-traded funds that tend to be dominated by longer-term, buy-and-hold investors are starting to see money drain out. A Bloomberg Intelligence index of ETFs used by financial advisers and individuals saw a $2.8 billion exodus last week. That marked the first net outflows of 2020, and the largest for any comparable period in at least two years.

Sales by this group are more evidence of stress in the market, but it’s not bad news from every perspective, with some strategists viewing it as a key sign of capitulation. With the S&P 500 trying to notch its first back-to-back gain in over a month after the Dow Jones Industrial Average surged to its best day since 1933, investors are at least wondering if the worst of the selling is over.

“There’s some cracks in terms of the retail investor,” said Eric Balchunas, an analyst at Bloomberg Intelligence. “There could be some showing nerves, they can’t stand the pain. But I wouldn’t say the dam is broken by any means.”

It’s a notable change among investors who just a couple months ago were embracing zero-commission trades, helping power the last leg of the 11-year bull run. The jury is still out on whether or not the retail cohort has given up whole-heartedly, but gone are the days when “buy the dip” was a strategy being unqualifiedly advocated in online chat rooms and other forums.

It’s hard to blame anyone for bailing, when every day brings yet another stomach-turning lurch or rally, with trillions in equity value erased, then created, then erased again. Already there were signs the professionals were bowing out, with a Deutsche Bank Asset Allocation measure of equity positioning at the lowest level ever in data going back to 2003.

Mom and pop are often the last to bail.

“Unfortunately retail investors, when uncertainty is at a peak, that’s when they want to sell, and that’s when stocks are at the cheapest,” said Sandy Villere, portfolio manager at Villere Balanced Fund. “It’s a very bullish sign when you see retail investors selling their portfolios and can mark market bottoms.”

One ETF tracking the S&P 500 that is particularly popular with retail investors, BlackRock’s $154 billion iShares Core S&P 500 ETF, which trades under the ticker IVV, has suffered eight straight days of outflows, totaling about $8.1 billion. That’s one of the worst stretches for the fund in two years, data compiled by Bloomberg show.

Retail clients at brokerages have certainly been busy doing something. At E*Trade Financial Corp., volume for log-ins and trades has surged as much as four times the amount witnessed in the fourth quarter of 2019, according to Chris Larkin, managing director of investing and trading product at the firm.

“We’ve seen a tsunami of volatility, this is unprecedented for our clients,” Larkin said. “Across the board, there’s nothing we’re doing today that is not showing record levels of engagement.”

Users of TD Ameritrade have been heavily involved, too, according to JJ Kinahan, the firm’s chief market strategist. Still, he said the level of panic has not been “all that high.”

Investors might not be happy about the state of their 401(k)s, he said, but they’re looking for opportunities, buying shares of perennial favorites -- Apple Inc., Tesla Inc., and Microsoft Corp. -- while trading options on the likes of Boeing Co. amid the jet-maker’s daily double digit swings.

The S&P 500 had its best session since 2008 on Tuesday, and a large part of the rally was likely tied to short covering. For further signals that a volatility peak may be in the past, market watchers are looking not only to coronavirus case numbers, but to what mom and pop are doing with their cash.