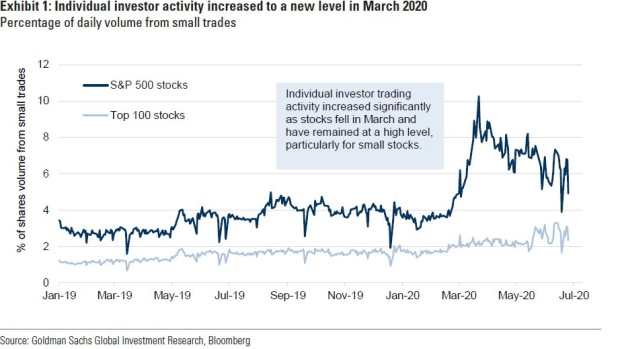 The New York Stock Exchange (NYSE) is reflected in a window of Federal Hall in New York, U.S., on Wednesday, June 17, 2020. U.S. stocks fluctuated as the recent rally begins to show signs of losing momentum amid a worrying increase in coronavirus cases. Photographer: Michael Nagle/Bloomberg , Bloomberg

(Bloomberg) -- Retail investors’ favorite stocks have for the most part been underperforming the broader market, according to an analysis by Goldman Sachs that is the latest to call into question the role they’ve played in the massive rebound.

The S&P 500 Index has rallied about 40% from its March 23 low, when fears of the Covid-19 pandemic and an unprecedented economic shutdown roiled markets. The migration to zero-commission trading for individual investors, people working from home or not working at all, and the lack of live sports to bet on sparked a growing interest in trading for the throngs of people self isolating at home.

While retail investors have been largely credited for driving the torrid comeback, Goldman is the latest to call into question that narrative. Last month, a Barclays Plc study comparing holdings of Robinhood brokerage app users to the daily stock returns of S&P 500 companies corresponded to lower returns.

Goldman’s analysis looked at small trades to identify retail activity -- less than $2,000 for shares and a single contract for options. For S&P 500 stocks, those trades have jumped to 7% of total volume from 3% in January 2019. Small options trades have risen to 12% from 9%, according to the report.

The inverse correlation suggests that declines in the S&P 500 lead to an increase in individual trading or the individual trading leads to a decline in prices which conflicts with the popular view that the increased activity has been driving stocks higher, according to the report dated June 30. The increased individual activity suggests that traders may have tried to “buy the dip” but the stocks have not immediately outperformed, it said.

The top 10% of stocks with options that are traded by individual investors on any given day have outperformed over the subsequent two weeks, suggesting that the traders are benefiting from momentum in the select stocks, the analysts found. Individuals are trading unusually volatile stocks, and their options are underpriced relative to recent and future realized volatility, they said.

It appears that individuals are overpaying for options, and stocks with high individual-investor activity in options tend to have elevated options prices with two-week implied volatility for the top 10% of individual heavy names 3-to-4 points higher compared to realized volatility in the bottom 90% on average. That metric suggests that selling options on popular retail names has been a profitable strategy, the analysts said.