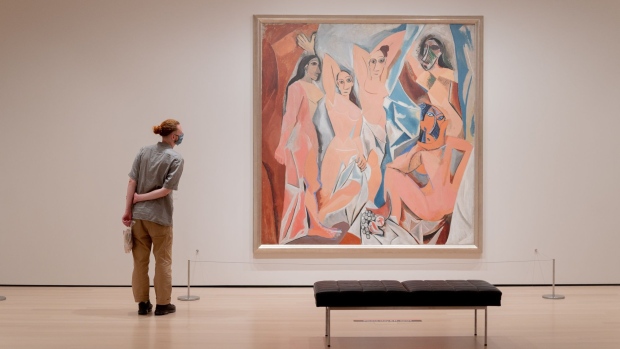 A visitor wearing a protective mask looks at artwork at the Museum of Modern Art in New York, U.S., on Thursday, Aug. 27, 2020. As of last week, New York City's rate of positive Covid-19 tests fell to the lowest since the pandemic began. , Bloomberg

(Bloomberg) -- The Museum of Modern Art in Manhattan, which houses one of the world’s greatest collections of 20th century paintings and sculptures, sold $100 million of taxable bonds on Tuesday.

The MoMa joins others, including the Whitney Museum of Modern Art and the Los Angeles County Museum of Modern Art, that have seized on low interest rates to refinance debt and help soften the financial toll of the pandemic that shut them down for months last year. The deal priced at par, and the yield at issue was 3.22%, or 88 basis points above U.S. Treasuries, according to data compiled by Bloomberg. The proceeds of the bond sale will refinance some of the $278 million of debt the museum issued in 2016 and pay down what it owes on two credit lines.

The securities are rated Aa2 by Moody’s Investors Service and AA by S&P Global Ratings, the third-highest ranks, reflecting its cultural significance and strong finances. Even with the museum shuttered in March by the pandemic, its annual revenue fell by less than 2% to about $226 million in the year through June because it gets only a small share of its income from ticket sales and memberships, according to figures disclosed in preliminary offering documents. It cut about $40 million of expenses to cope with the closure and reopened in late August at 25% capacity, according to a document circulated to prospective investors. Goldman Sachs Group Inc. underwrote the sale.

Moody’s analyst Dennis Gephardt said the company has a stable outlook on MoMa’s bonds because of “ongoing strength in operating discipline, gradual reduction of debt and measured recovery of visitor demand.”

Matt Fabian, senior analyst for Municipal Markets Analytics Inc., said before the sale that the bonds should be in demand.

“There is a bigger and stronger market for taxables lately,” he said. “MoMA is a very strong credit because of its role in American cultural life and its extensive resources in cash and real estate.”