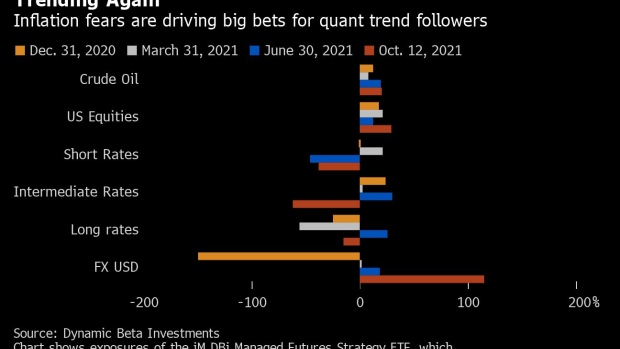 With yields edging up and price pressures breaking out, the $340 billion complex of Commodity Trading Advisors is now “100% short” on everything from dollar to British pound rates in Nomura Holdings Inc. estimates.

These systematic investors are also building outsized short positions across the entire yield curve, according to Dynamic Beta Investments. The firm, which runs an ETF that mimics a CTA, says such exposures are particularly intense in 10-year U.S. Treasury notes.

The question now is whether the most credible inflationary threat in more than a decade will reward such bearish positioning going forward.

“It takes time for the market to fully price the hawkishness,” said Steeve Brument, head of quant multi-asset strategies at Candriam, a New York Life Investments unit that runs a trend fund. “That it takes time to assimilate new information is actually what’s creating trends, so there might be more opportunity in rates.”

A rally in long-end Treasuries flattened the yield curve Wednesday after the U.S. reported the fastest inflation since 2008 -- a sign investors are starting to price in slower economic growth amid earlier rate increases.

“The global front-end is scrambling to pull-forward timing on potential hikes (thus adding risk premium), as central banks are forced to play ‘catch-up’ and put the genie back in the bottle,” Charlie McElligott, cross-asset strategist at Nomura, wrote in a Wednesday note. “Bearish rates/fixed income is getting pretty crowded again.”

With Treasuries down over the last seven weeks, commodities set for their best year since 1979 and the greenback rising against all but three major currencies in the past month, CTAs are finding plenty of opportunities to ride the inflation hoopla.

In addition to U.S. debt, Nomura estimates CTAs are short bonds everywhere from Europe and Japan to Britain and Australia as central banks beyond the Federal Reserve also start signaling intentions to pare pandemic stimulus.

A Societe Generale SA index of CTAs has extended its 2021 gain to 8.8% -- set for its best performance in seven years.

CTAs dissect price patterns to trade a range of cross-asset futures. Given their investing horizons and models differ, returns this year among the larger players vary. Aspect Capital’s Diversified Trends fund is up 11%, while Transtrend’s DTP Enhanced Risk surged 25%. The AQR Managed Futures Strategy Fund gained 2% and the Man AHL Alpha fund is up nearly 6%.

With positioning now firmly bearish, the outlook has become a little murkier. At JPMorgan Chase & Co., flows guru Nikolaos Panigirtzoglou reckons U.K. and German bonds are almost oversold at this point, which might prompt some momentum traders to take profits.

Regardless, signs the inflationary era may endure looks like a boon for momentum quants, who have struggled to ride reliable market moves in the low-rate era.

“Today interest rates are still pretty low,” said Brument. “If one day we get a central bank that needs to aggressively fight inflation, that would be tough for markets but a good opportunity for CTAs.”