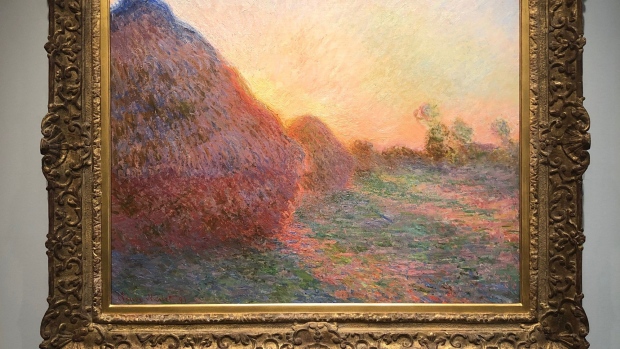 (Bloomberg) -- A sun-drenched landscape by Claude Monet fetched $110.7 million at Sotheby’s in New York on Tuesday, setting a record for the Impressionist painter.

Painted in 1890, “Les Meules,” from the artist’s series featuring haystacks, had been estimated at $55 million. The final price includes fees.

The previous auction record for Monet was $84.7 million, for one of his water lilies works sold at Christie’s last year.

The bidding war lasted for more than eight minutes and drew at least six bidders. The winning bid was placed by a woman sitting in the back of the room, with paddle 989. Her identity wasn’t immediately clear.

To contact the reporter on this story: Katya Kazakina in New York at kkazakina@bloomberg.net

To contact the editors responsible for this story: Pierre Paulden at ppaulden@bloomberg.net, Josh Friedman, Peter Blumberg