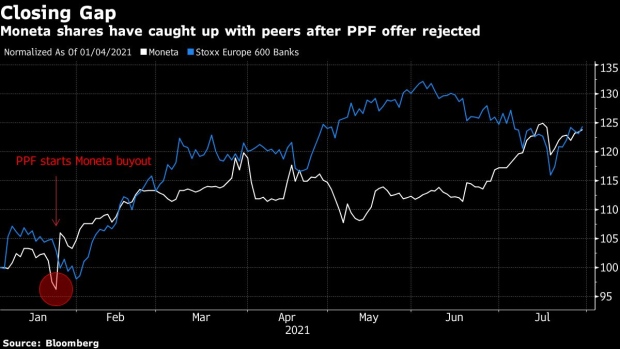 (Bloomberg) -- Moneta Money Bank AS expects the private-equity firm owned by the heirs of billionaire Petr Kellner to make another takeover attempt after the Czech lender’s shareholders recently rebuffed the previous approach.

PPF Group NV will probably modify its latest proposal, Moneta Chief Executive Officer Tomas Spurny told reporters on Thursday. If completed, the merger with PPF’s Air Bank Group would give Moneta the size and reach it needs to become more profitable and better withstand the intensifying competition it is facing especially in consumer loans, he said.

Before he died in a helicopter crash in March, Kellner proposed to sell Air Bank to Moneta in a complex deal that would give PPF control over the combined entity. A general meeting in June voted in favor of buying the PPF unit for 25.9 billion koruna ($1.2 billion), but rejected the plan to pay for it mostly with new shares.

“The acquisition was supported by a majority of shareholders, hence it is likely that we will receive an alternative proposal from the selling counterparty,” Spurny said. “If we were to merge with Air Bank, we would obviously have a lot easier time defending the market share.”

He declined to comment on whether there had been any talks between Moneta management and PPF since the June 22 extraordinary general meeting.

PPF wants to create one of the largest retail banks in the Czech Republic that could better compete in a market dominated by international players including KBC Groep NV and Societe Generale SA. In the process, the investment group has built a 30% stake in Moneta, making it its biggest shareholder.

That level of commitment has prompted speculation that PPF won’t walk away from the transaction, which originally valued Moneta at 80 koruna per share, a price some shareholders found as too low. Expectations of improved terms have lifted the bank’s stock, which is now trading around 86 koruna.

Activist investor Petrus Advisers Ltd., Moneta’s second-largest owner and the loudest opponent of the previous proposal, said after the general meeting the bank was a “super-strategic asset” and PPF needed to offer at least 90 koruna for it.