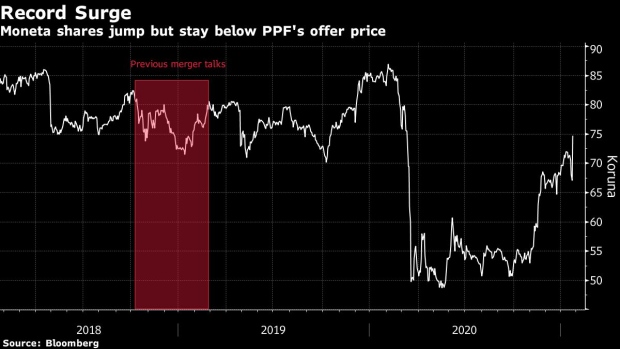 (Bloomberg) -- Moneta Money Bank AS jumped the most on record after billionaire Petr Kellner proposed to buy a stake in an attempt to revive one of the largest Czech banking mergers that fell through two years ago.

Kellner’s PPF Group NV wants to acquire as much as 29% of the Prague-listed bank in a tender offer to all existing shareholders next month at 80 koruna per share, Moneta said on Friday. The investment company also asked Moneta management to start talks on buying its Air Bank and other Czech and Slovak financial assets through a share swap that could give the richest Czech a majority in the combined entity.

“The offer will be attractive especially for short-term investors who are looking for an exit opportunity,” said Thomas Unger, an analyst at Erste Group Bank AG in Vienna.

PPF is making the approach about two years after failed talks with Moneta management about a merger with a different structure. This time, the investment group seeks to boost the chances of the deal by building a significant stake in the lender.

While the share jumped early on Monday, the proposal met an early resistance from Petrus Adviser, which holds less than 3% in Moneta. The activist investor considers the fair value of the lender’s stock at 95 koruna and says the proposed share swap overvalues Air Bank.

Moneta and PPF’s Air Bank would together hold assets totaling 454 billion koruna ($21 billion) as of the third quarter of last year, which would make the combined balance sheet the fifth largest among the country’s banks if the merger was agreed.

Short-term retail investors might take advantage of the offered price premium, according to Milan Lavicka, an analyst at Prague-based J&T Banka AS. He said the amount of shares PPF is be able to buy will be crucial for the proposed bank deal.

“At first sight, the transaction does not look attractive for Moneta,” Lavicka said. “Nevertheless, if the voluntary tender offer is successful, it will be very difficult for other shareholders to prevent this transaction.”