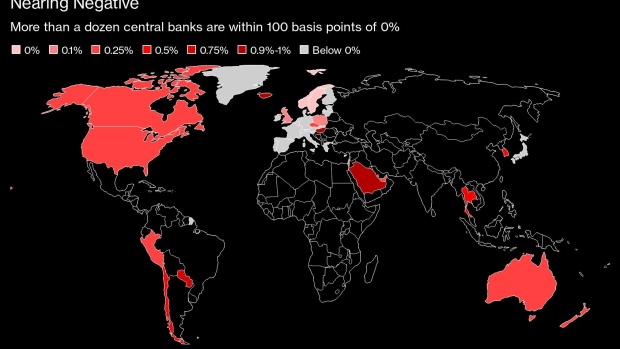 The Marriner S. Eccles Federal Reserve building stands in Washington, D.C., U.S., on Tuesday, Aug. 13, 2019. The Trump administration announced today it will delay until mid-December the 10% tariff on some Chinese products on many holiday-shopping lists, with the president acknowledging that the levies would have hurt consumers. Photographer: Andrew Harrer/Bloomberg , Bloomberg

(Bloomberg) -- Central banks on four continents will project a collective message of nervous unease in interest-rate decisions this week as the persistence of the coronavirus impedes economic recoveries throughout much of the world.

Monetary authorities in Brazil and India -- both enduring acute outbreaks of the disease -- will probably cut benchmark borrowing costs. Others from the U.K. to Australia are likely to pledge heightened vigilance and continued support, similar to that offered by the U.S. Federal Reserve when it left rates near zero on Wednesday.

The unprecedented growth crisis caused by the Covid-19 virus has provoked easing from central banks everywhere by officials who know the most optimal stimulus -- a vaccine -- is one they can’t offer. Monetary institutions normally guided by economic forecasting are being forced to wait instead for advances in medical science to clear the fog around their policy outlooks.

Such is the uncertainty that the Bank of England, which would normally unveil new growth projections at its decision on Thursday, insists on describing them as “scenarios” because the coronavirus is defeating its officials’ attempts to attach probabilities to the varying outcomes.

What policy makers will have to work with at the seven central banks scheduled to meet in coming days -- including the Czechs, Thailand and Georgia too -- is more evidence of the economic damage caused by disruptions to combat the disease. Global purchasing managers indexes in most jurisdictions are likely to confirm that the rebound from the worst of the world’s lockdowns remains weak, while jobs data in the U.S. is predicted to show a rebound in hiring slowed significantly last month.

“A likely cut from Brazil, moves in India to give more traction to past easing, and a reassessment of the shape of the UK recovery shows central banks are not out of the game. Still, with the first urgency of the crisis past, markets stable, and space to act severely depleted, the focus of attention has shifted to fiscal policy.”

Click here for what happened last week and below is our wrap of what else is coming up in the world economy.

The U.S. labor market’s V-shaped recovery in May and June probably lost substantial vigor in July, as a resurgent coronavirus forced a renewed wave of business closings and layoffs.

Employers likely added just over 1.5 million workers to payrolls last month, or about a third of the prior month’s pace, according to a Bloomberg survey ahead of Friday’s Labor Department report, which covers the period through mid-July. The jobless rate is projected to drop by 0.6 percentage point to 10.5%, compared with a 2.2-point decline in June, and still triple the pre-pandemic level of 3.5%.

A day before the jobs report, the weekly figures on filings for unemployment benefits will indicate whether the labor market’s slowdown further deepened in late July. Last week’s report showed a second straight increase in initial filings, along with the biggest jump in continuing claims since May, ominous trends that could presage a stall or even a drop in jobs in August.

With the Bank of England not expected to take any action in its meeting next week, the focus will be on signals of future moves, particularly whether policy makers are inclined to take interest rates below zero. The Czech central bank, which announces its decision on the same day, is also expected to keep rates on hold.

On the data front, high-frequency indicators for the U.K. and the euro area are expected to confirm the rebound taking place in the third quarter. Figures from Sweden, on the other hand, will give a fresh glimpse into whether the country’s relatively lax approach to the Covid-19 pandemic has paid off in economic terms. Bloomberg Economics expects an 8 percent slump in output.

Japan re-revises its first quarter GDP data on Monday, just two weeks before far-worse second quarter figures are due out. Purchasing manager reports from across the region will be watched Monday to see if the supply-side recovery is holding into the second half.

Australia’s central bank meets Tuesday and is set to keep its overnight cash rate and three-year yield target unchanged. On Wednesday, Bank of Thailand is expected to keep rates steady at an all-time low, seeking to preserve its limited policy space in case the economy worsens further in one of the last MPC meetings chaired by Governor Veerathai Santiprabhob. India’s monetary policy committee is likely to cut rates on Thursday to shore up the growth outlook despite a recent surge in headline inflation. On Friday, China will release trade data for July.

On Monday, Colombia’s central bank posts the minutes of its July 31 meeting, where the key rate was cut to 2.25% with possibly one more quarter-point reduction on tap for August. Two days later, Brazil’s central bank looks set to extend its third-longest easing cycle of the last decade with a quarter-point cut to push the overnight rate to a record-low 2%.

Reports on Chile’s economic activity and Brazil’s industrial output for June will indicate nascent rebounds even as the year-on-year figures show double-digit declines. Lastly, July consumer price data from Peru, Colombia, Mexico, Chile and Brazil should confirm that inflation rates are either within or even below their respective target ranges.