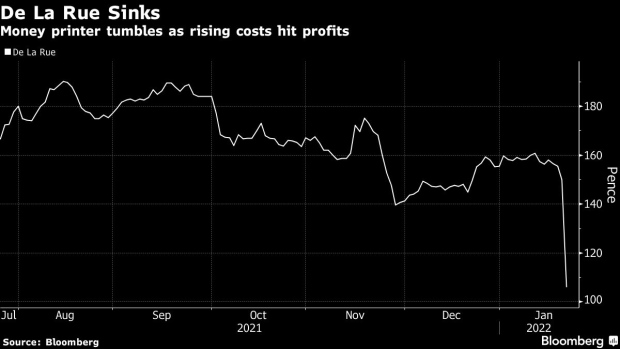 British twenty, ten, and five pound banknotes sit in this arranged photograph in Danbury, U.K., on Monday, March 23, 2020. The pound rose, boosted by broad dollar weakness, after the U.K. government banned all unnecessary movement of people for at least three weeks in order to reduce the spread of coronavirus. Photographer: Chris Ratcliffe/Bloomberg , Bloomberg

The stock dropped as much as 30% in early trading after the Basingstoke, England-based company said in a statement that staff absenteeism caused by the latest Covid-19 variants had reduced its output, while it has also been affected by supply chain shortages in chips and raw materials.

“Significant headwinds, primarily relating to the Covid-19 pandemic, have become more pronounced,” the company said. De La Rue said the issues would also cause a 12-month delay to results from a turnaround plan announced in 2020 following two years of outsized share-price slumps.