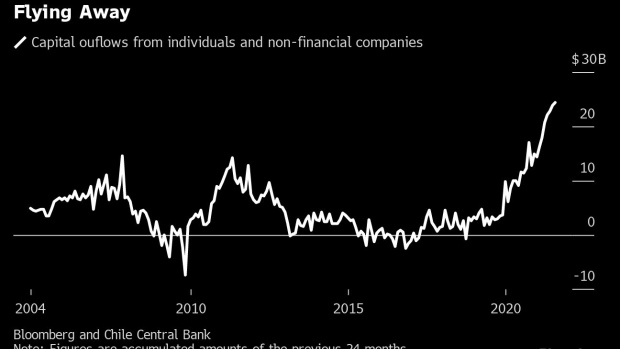 Demonstrators wave Chilean and Mapuche indigenous flags during a protest at Plaza Italia in Santiago, Chile, on Sunday, Oct. 18, 2020. This Sunday marked the one year anniversary of protests that rocked Chile, and as part of an agreement to end the unrest, Chileans will vote this month on whether to ditch their constitution, a legacy of the Pinochet dictatorship in the 70s and 80s, and draft a new one. The new charter could clear the way for reparations and return of land to the Mapuche people. , Bloomberg

(Bloomberg) -- For decades, Chileans watched from afar as their South American neighbors grappled with galloping inflation, financial crashes and extreme political swings, destabilizing forces that compelled the wealthy to send hundreds of billions of dollars to havens in Switzerland, the Cayman Islands or the U.S.

But now, the long-stable Andean nation is getting a taste of that turmoil. A mix of social upheaval, plans for a new constitution and the most polarized election in recent memory is sapping Chileans’ faith in their currency.

The pace of foreign outflows from individuals and non-financial companies has accelerated, reaching $8.8 billion in the six months through August and $24.3 billion in the past two years, according to data from the central bank. That’s equivalent to more than 9% of annual gross domestic product.

And even when cash isn’t leaving the country, savers are converting pesos into dollar deposits at a furious clip. Checking-account balances in foreign currency almost tripled over 24 months to a record $1.6 billion in September.

Whether the outflows accelerate or abate over coming years may be partly determined by Sunday’s presidential election. A victory for the leftist candidate Gabriel Boric who has pledged to raise taxes, increase spending to improve social services, and end the privately-run pension system, could spark more outflows. Or the wealthy could take some comfort in a win by the conservative candidate Jose Antonio Kast, who has vowed to bolster investor confidence and the rule of law.

Whatever the result, Chile’s financial stability has already suffered, according to a handful of wealth managers interviewed in Santiago. And a new constitution being drafted that will be voted on next year, is as much a risk as the election itself.

“Undoubtedly, there has been institutional damage in the last two years and the uncertainty generated will continue for the coming years, regardless of the outcome of the elections,” said Klaus Kaempfe, portfolio solutions director at Credicorp Capital. “Increasing capital flight in a consequence to all this.”

On top of growing demands for social spending to alleviate poverty, the polarized election slate and a new charter that could undermine Chile’s free market model, lawmakers have approved the withdrawal of some $50 billion of private pension cash during the pandemic. That’s forced asset managers to liquidate large positions in local government and corporate bonds and led the central bank to step in as buyers to prop up the market.

It’s all a radical change from the liberal economic policies that began under the dictatorship of Augusto Pinochet, who empowered a generation of Chilean economists educated at the University of Chicago to make policy. The prescriptions of those so-called Chicago Boys endured through the introduction of democracy, eventually creating Latin America’s wealthiest nation.

But that stability now seems under threat. Stocks have tumbled 11% since violent street protests erupted two years ago, with citizens demanding better economic conditions for all. The currency has weakened almost 13% this year alone, aggravated by capital outflows.

The wealthy have moved savings abroad, created new holding structures offshore and are investing much heavier in global assets than domestic ones. Family businesses are considering cashing out now, while some in the upper class are mulling opportunities to work abroad for the first time. Others are snapping up cars or properties as a hedge against turmoil as well.

For local wealth managers, one of the best businesses at the moment is to have a U.S.-based subsidiary that can receive money from Chilean clients. One financial firm said that in three months its U.S. business had grown to a level that was expected to take three years. Another said that offshore holdings, which used to average about 12% of investors’ portfolios, are now closer to 40%.

Quest Capital is getting ready to open an office in Miami during the first half of 2022. The firm already created three new funds in the U.S. and is looking for more opportunities.

“Our natural growth process is abroad. In Chile all investments are paralyzed and we are lacking legal certainty,” said Gonzalo Trejos, a partner and strategy manager at Quest. “Much of the damage to the financial system is already done.”

The shift can be seen on the ground in the U.S. as well.

Chileans made up about 3% of Florida’s foreign homebuyers in the 12 months through July 2021, the highest proportion since at least 2007, according to a Florida Realtors report last month. The data show that they have been gravitating toward areas including Miami and Orlando.

That’s about 675 homes purchased in that period, or double the previous 12 months.

Whoever leads Chile’s next government will have to work to bolster the confidence of both international investors and members of the upper class trying to figure out what to do with their savings, according to Jaime Achondo, a general manager at brokerage firm Fynsa.

“Confidence in Chile was cut short by a flock of black swans,” Achondo said. “It will be a long path and great challenge to regain the trust that made Chile shine. Our bet is that it will, but in quite a few years from now.”