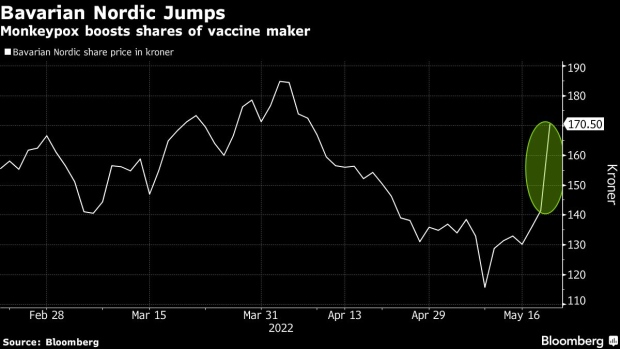 (Bloomberg) -- The spread of monkeypox boosted the shares of Bavarian Nordic A/S, which says it’s the only company to make a vaccine approved for the viral infection.

The Danish company gained as much as 26% in Copenhagen trading on Thursday after saying it had secured a contract to supply its smallpox shot -- which is also cleared against monkeypox -- to an undisclosed European country.

Monkeypox, a virus that is endemic in some forested parts of central and west Africa, has been found in a handful of cases in the UK, Spain and Portugal in recent days and in one person in the US. The World Health Organization said Wednesday it was monitoring a situation that “is evolving rapidly.”

Bavarian’s smallpox vaccine is also approved in the U.S. and Canada for monkeypox, according to the company. In Europe, it’s only approved for smallpox but has been used off-label for monkeypox as well.

Although the order is “probably of modest size” it’s very positive for Bavarian, Soren Lontoft Hansen, an analyst at Sydbank, said in a note, repeating a buy recommendation on the shares.

“We can’t rule out that more countries will sign contracts with Bavarian in the near future to ensure emergency preparedness if the spread of the infection in Europe and the US continues,” the analyst wrote.