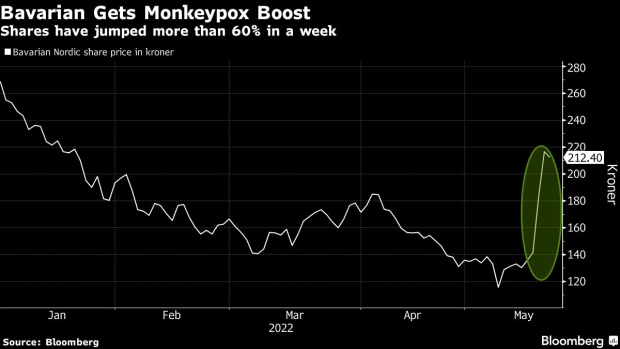 (Bloomberg) -- Bavarian Nordic A/S, the only maker of an approved vaccine to prevent monkeypox, is in talks to supply several countries that have identified cases of the viral infection.

The Danish company’s production could be ramped up to 30 million doses a year if necessary, Chief Financial Officer Henrik Juuel said in a phone interview.

“We can see how governments have learned lessons from Covid and are keen to be well-prepared,” he said. “We’re ready to change our production schedule so we can help deliver doses on short notice.”

Bavarian’s smallpox vaccine is approved in the US and Canada for monkeypox, which is related but less severe, and has also been used off-label in Europe. The company is working to get the product approved for monkeypox in the European Union and other large markets, according to Juuel.

Monkeypox is normally endemic in some forested parts of central and west Africa, but in recent weeks it has cropped up in several European countries and the US. Some of the cases in Europe stemmed from local transmission.

Bavarian said last week it had signed a delivery contract with an undisclosed European country. The potential buyers are primarily in Europe, and Bavarian’s staff has worked through the weekend to map out what it can deliver to various governments, Juuel said.

“We’re in talks with most of the countries already affected,” the CFO said. “Some of them already have some stock of our vaccine and can handle the situation. We’re also talking with some countries not yet affected.”

It’s unlikely that demand will surge above Bavarian’s 30 million-dose capacity -- which would cover 15 million patients each getting two shots -- the CFO said. But if it did, the company could contract with other vaccine makers to expand capacity, a process that would take six to 12 months, Juuel said.

Any cross-protective immunity from prior smallpox vaccination will be limited to older persons who were immunized before the disease was eradicated, according to the WHO.