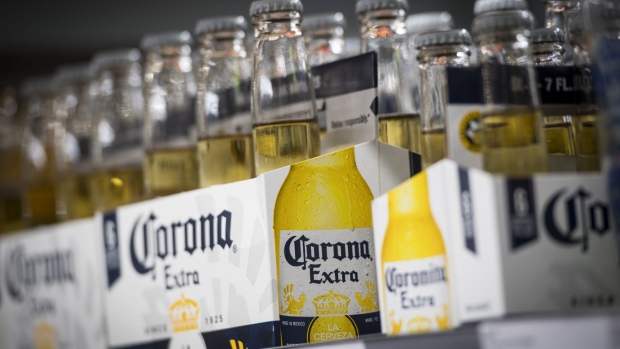 (Bloomberg) -- Talks between Monster Beverage Corp., the maker of energy drinks, and Corona brewer Constellation Brands Inc. about a combination are progressing, according to people familiar with the matter.

A merger agreement could be reached in the coming weeks if negotiations proceed smoothly, the people said, asking not to be identified discussing private information. The similarly sized companies have a combined market capitalization of about $90 billion.

Shares of Monster, which counts Coca-Cola Co. as a major shareholder, have fallen about 8% through Monday since Bloomberg News reported in November that it had held discussions with advisers about a potential tie-up with Constellation, whose Class A stock is flat during that period.

An agreement might take longer to reach or could still fall apart, the people said. The exact structure of the transaction under discussion couldn’t immediately be learned.

In January, Monster announced the $330 million purchase of CANarchy Craft Brewery LLC. That deal added about a half-dozen brands including Squatters, which makes Juicy IPA, to its drink portfolio. A tie-up with Constellation would represent a much more significant bet on alcoholic drinks. Such a transaction may also have implications for Coca-Cola’s almost 20% stake in Monster and its distribution pact with the beverage maker.

Any deal would create a unique combination of energy drinks, alcoholic beverages and potentially marijuana. Constellation also has a stake of almost 40% in Canopy Growth Corp., a Canadian cannabis company that sells THC-infused drinks in that country. While a tie-up with Constellation could open up growth opportunities for Monster, some analysts see limited opportunity for cost savings because they operate in different segments.

A potential transaction would likely require the support of the Sands family, which is a major shareholder in Constellation and holds top board positions.

The firm, which is based in Victor, New York, started as a wine producer in 1945. It now sells Corona Extra and Modelo Especial in the U.S. as well as Casa Noble Tequila, Svedka Vodka and High West Whiskey.