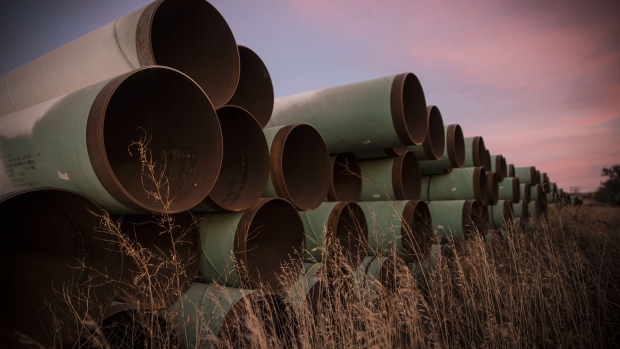 TC Energy Corp.’s Keystone XL oil-sands pipeline was a dealt a setback with a judge’s ruling that the U.S. Army Corps of Engineers improperly approved a streamlined permit process without fully evaluating the impact on endangered species.

In a legal challenge brought by environmental groups, a federal judge in Montana on Wednesday ordered the agency to conduct further review and barred it from authorizing dredging in waterways covered by the permit.

“We have received the judge’s ruling and continue to review it,” Calgary-based TC Energy said in a statement. “We remain committed to building this important energy infrastructure project.”

The stakes in the legal challenges to Keystone XL rose higher than ever last month, when Canada’s oil-rich province of Alberta announced US$5.3 billion in aid to help finance the conduit’s construction and TC Energy formally committed to building the line. Already, the project was seen as a key lifeline for Alberta’s oil-sands producers, which have suffered from a lack of pipeline capacity that has weighed on local crude prices and restrained their ability to boost output.

Even short delays to Keystone XL’s construction could set the project back by a full year because pipeline work is highly seasonal, requiring unfrozen ground and other conditions. Legal delays last year caused TC Energy to miss the 2019 construction window, pushing the already-delayed project back even further. TC Energy Chief Executive Officer Russ Girling said during a presentation last week that construction may progress more slowly because physical distancing measures in response to the coronavirus.

The Sierra Club and other groups that sued the Army Corps in July said in a statement that the ruling invalidates a nationwide permit used to fast-track Keystone XL as well as other pipeline and utility projects. They said it could block Keystone’s construction through hundreds of water crossings along its route.

Sonya Savage, Minister of Energy of Alberta, Canada, said the ruling was narrow and only directs the Army Corps to conduct additional review on two river crossings.

“Keystone XL is critical for the future of Alberta, Canada and the U.S.,” Savage said in a tweet. “We remain committed to this extremely important project.”

The Army Corps didn’t immediately respond to a request for comment.

TC Energy’s projected 2023 in-service date for its Keystone XL pipeline may be in jeopardy after the District Court of Montana voided the Army Corps of Engineers’ water permit, a decision we think will be upheld when it’s appealed. The April 15 ruling was a surprise, given the breadth of the decision.

The order by U.S. District Judge Brian Morris came a day before the judge is scheduled to hold a hearing on challenges to President Donald Trump’s issuance last year of a permit allowing the pipeline to cross the U.S.-Canada border. That permit was intended to replace one that Morris had blocked in 2018, saying the U.S. State Department needed to do further environmental reviews.

--With assistance from Ari Natter.