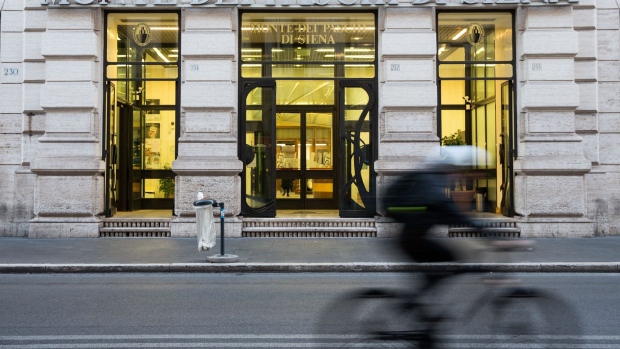 A bicycle rider passes a branch of Banca Monte dei Paschi di Siena SpA bank in Rome, Italy, on Friday, Dec. 23, 2016. Italy's government is set to rescue Monte Paschi after the world's oldest lender failed to raise 5 billion euros ($5.2 billion) from the market, in what will be the country's biggest bank nationalization since the 1930s. , Bloomberg

(Bloomberg) -- Banca Monte dei Paschi di Siena SpA was the worst performer in European regulators’ stress tests as the only lender in a group of 50 to have a key measure of capital wiped out.

The Italian lender’s a common equity tier 1 ratio fell to a negative 0.1% in an adverse scenario, according to the results released Friday. The simulation by the European Banking Authority assumed a prolonged period of low interest rates and a steep contraction of the economy over three years.

The results were published a day after news broke that Monte Paschi, the world’s oldest bank, was in talks with UniCredit SpA about being acquired. The Siena-based lender has become a burden to the Italian state since it was first bailed out in 2009. Undermined by souring loans and derivatives deals that backfired, the bank was nationalized in 2017 through a 5.4 billion-euro state bailout.

Since then, it has struggled to deliver consistent profits and rebuild capital given limited room to maneuver under terms demanded by the European Union in return for supporting the aid plan.

UniCredit said late Thursday it started talks to buy Monte Paschi, opening the way to the Italian government’s favored solution for the long-troubled lender. Paschi said in a note that the stress test results are coherent with capital plan sent to ECB in January which envisages a 2.5 billion-euro capital increase as “a fall back option.”

Monte Paschi was also among only four banks that saw their leverage ratio fall below the regulatory minimum of 3%, along with HSBC Holding Plc’s continental European unit. The U.K. lender is transferring its unprofitable French retail operations to Cerberus Capital Management, in a deal that’s set to cost it as much as $3 billion.

The stress tests don’t have a pass or fail grade, but they guide the European Central Bank and other regulators in assessing the financial system’s capital needs and lenders’ financial resilience. The largest European Union banks showed they are better prepared after the pandemic to deal with a severe economic crisis than they were three years ago.