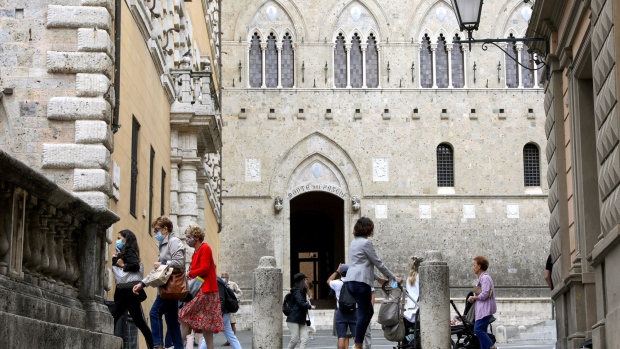 (Bloomberg) -- Italy is in talks to inject at least 5 billion euros ($5.6 billion) into Banca Monte Paschi di Siena SpA ahead of a sale of the troubled lender to UniCredit SpA, according to people familiar with the matter.

The finance ministry, which controls Monte Paschi, is considering a cash infusion for the Tuscan bank through a rights offering that would allow minority shareholders to opt out of the increase, said the people, who asked not to be identified discussing the private deliberations.

The end result would be a larger financial contribution from the government -- compared with 3 billion euros estimated earlier -- to meet conditions set by UniCredit’s Chief Executive Officer Andrea Orcel for his purchase of Monte Paschi following the financial boost, they said.

The two sides are still wrangling over the amount as a 5-billion-euro capital increase only covers a short time frame, while for a long-term solution for Monte Paschi, either with another bank or standalone, the amount needed would be significantly higher, one of the people said. In any case, the bill will mostly fall to Italian taxpayers as Paschi is majority controlled by the state.

Spokespeople for UniCredit and for the finance ministry declined to comment.

The two sides have been negotiating for months an accord which could be announced over the next weeks, but the deal could still fall apart if the government’s final proposal doesn’t comply with all the conditions agreed in July, which require capital neutrality for UniCredit, a person familiar with the matter said.

Bloomberg News reported earlier that the initial framework agreement between the two sides would not include Monte Paschi’s bad loans and legal risks, and the state will retain some 300 branches, leasing, factoring, capital services and a portion of the corporate center, the people said.