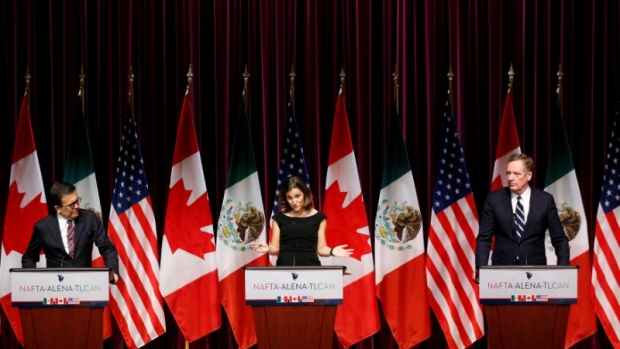 WASHINGTON -- The ministers leading the effort to forge a new North American Free Trade Agreement will gather for a longer-than-expected round of talks next week as negotiations enter a sensitive political period with big decisions looming.

Foreign Affairs Minister Chrystia Freeland, American counterpart Robert Lighthizer and Mexico's Ildefonso Guajardo will be on hand Jan. 29 for the closing of the latest round, which was originally scheduled to take place Jan. 23-28 but will now get underway Jan. 21.

The end of the talks has been pushed an extra day, in part, to accommodate those ministers travelling from economic talks in Davos. There's also an acute desire to make progress in this round, to build momentum in hopes of avoiding some approaching political shoals.

There are no talks scheduled beyond March and U.S. President Donald Trump must choose his subsequent course of action: start the process of cancelling NAFTA as threatened, keep negotiating, or hit the pause button for a few months as Mexico and the U.S. plunge into national elections.

Signs of how the process could become snared in electoral politics were illustrated Thursday on Twitter: the presidential candidate for Mexico's ruling party tweeted his criticism of recent comments from the Trump administration.

Trump said his promised border wall would indeed be paid for by Mexico -- via NAFTA steering profits north to the U.S. Trump's comments were compounded by his chief of staff John Kelly telling Fox News that visa fees or NAFTA could pay for the wall.

"The wall isn't just about numbers, but about dignity and respect between our peoples," said Jose Antonio Meade, candidate for the ruling establishment PRI party.

"Let's say it clearly: Mexico will never pay, under any circumstances, for that wall."

New surveys illustrate the challenge, in the hothouse political atmosphere of Mexico's election campaign, for any Mexican government or presidential candidate to be seen making concessions to Trump through the July vote.

Mexicans aren't thrilled with the U.S. these days. International views of the U.S. plummeted last year in a new Gallup global poll -- with only 16 per cent of Mexicans expressing support for the American role in the world in a 28-per-cent slide from the previous year.

The plunge within Canada was even more dramatic -- the largest such drop in the Western Hemisphere, according to Gallup. The percentage of Canadians approving of the U.S. role in the world slid 40 points, to just 20 per cent. Another new poll by Angus Reid said a mere 13 per cent of Canadians had a positive impression of Trump.

Several trade observers say the key to preserving NAFTA will be to steer it safely through the imminent turbulence.

The president keeps declaring that invoking NAFTA's cancellation clause is the best way to force concessions and get a deal. Trump says he's being dissuaded from pro-traders in his party, including farm-state senators who warn it will scare away export customers.

The best way to keep Trump from going that route, and steer him toward another path, is to show progress in Montreal, keep the process moving, and keep things positive, said Dan Ujczo, a trade lawyer at Dickinson Wright who has worked with both the Canadian and American governments.

"I don't think this administration has any intention to withdraw from NAFTA," Ujczo said.

"Each side has dug in. And I think Montreal has to get each side out of their trenches, and onto the battlefield.... I think the story of Montreal is, 'How do we get past January?' I think there has to be a demonstration of progress at this point to keep the negotiations moving forward into these critical deadlines we have at the end of March...

"Step 1 has to be demonstrating progress in Montreal."

Washington trade adviser Eric Miller of Rideau Potomac Strategy Group concurred, saying progress on the auto rules-of-origin issue would be an example of good faith. Canada intends to present various options for helping the U.S. achieve some of its goals on auto production, sources have said.

Big political decisions are coming, and they will be based on impressions shaped to a great degree in Montreal, Miller said: "The inflection point is approaching: are we headed to a deal, or aren't we?"