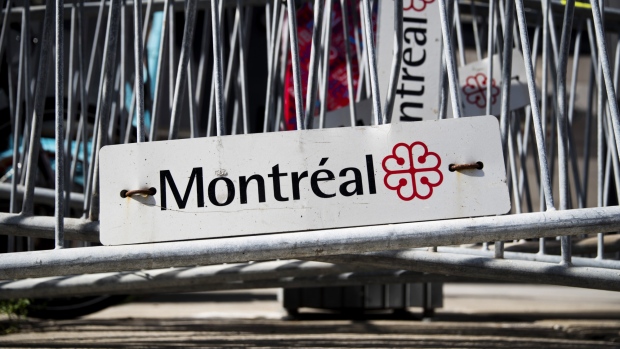 A "Montreal" sign is seen on barriers in Montreal, Quebec, Canada, on Monday, Aug. 20, 2018. Median single-family home prices in Montreal rose 5.7% to C$336,250 in July from a year ago, according to the Greater Montreal Real Estate Board (GMREB). , Bloomberg

(Bloomberg) -- Three U.K.-based companies specializing in artificial intelligence are opening offices in Montreal to take advantage of the city’s expertise in deep learning, creating more than 130 jobs in the next three years.

QuantumBlack, a data analytics company owned by consulting firm McKinsey & Co, said Tuesday it will be located at the Mila-Quebec Artificial Intelligence Institute. The center has contributed to making Montreal one of the world’s AI hubs under the leadership of neural networks pioneer Yoshua Bengio. It plans to hire as many as 100 people.

The other two businesses are WinningMinds.ai, whose AI platform analyses conversations to help employers spot talent and BIOS, which is developing systems to allow AI-based healthcare treatments. More than 30 foreign projects focusing on AI have now set up in the city in the past two years, according to Montreal International, which seeks to attract investment from abroad.

The latest arrivals “confirm that the foundations have been laid for us, here in Quebec, especially in Montreal, to build an artificial intelligence ecosystem that is dynamic, solid, successful and internationally recognized,” Chantal Rouleau, Quebec’s deputy transport minister, said in a statement.

The announcements come as Quebec’s largest city hosts NeurIPS, one of the top annual conferences for people working in artificial intelligence and machine learning, which draws thousands of attendees. Adding to a flurry of events attached to the conference, Universite de Montreal on Tuesday also published the Montreal Declaration for responsible AI development, a detailed set of ethical guidelines that’s been in the works for more than a year.

--With assistance from Jeremy Kahn.

To contact the editors responsible for this story: Crayton Harrison at tharrison5@bloomberg.net, Jacqueline Thorpe, Chris Fournier