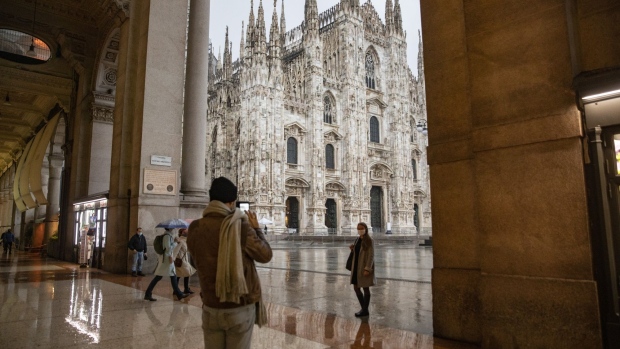 A visitor takes a photograph of a person standing in front of the Duomo Cathedral in Milan, Italy, on Monday, Oct. 26, 2020. Italy introduced its strongest virus restrictions since the end of a lockdown in May, and Spain will impose new measures, including a nationwide curfew. Photographer: Francesca Volpi/Bloomberg , Bloomberg

(Bloomberg) -- Italy’s credit grade was left unchanged for now by Moody’s Investors Service, which said the economy is expected to recover in the first half of the year, though “growth will remain a medium-term challenge.”

The Baa3 rating is just one notch above junk, though Moody’s stable outlook means there isn’t immediate risk of a downgrade for the euro area’s third-largest economy. The country’s financial position has been severely weakened by the cost of dealing with the coronavirus.

“Italy’s debt burden is rising substantially this year and will remain very high for many years,” Moody’s said in a statement Friday. “However, Moody’s expects that recovering growth combined with the temporary nature of many of this year’s emergency measures will allow the budget deficit to fall in the coming years and support a gradual reduction in the public debt ratio.”

Prime Minister Giuseppe Conte’s government has passed 100 billion euros in stimulus so far to help companies and workers, and more may be coming if increasingly stricter lockdowns continue to damage the economy. That could push the debt ratio close to 160% of output, according to government forecasts.

The worst-case scenario given by the government in its most recent budget outlook has the economy shrinking 10.5% this year and expanding only 1.8% in 2021.

The European Central Bank has been helping countries like Italy by keeping borrowing costs down with its pandemic purchase program. Italy is also set to receive the lion’s share of European Union recovery fund grants and loans, as much as 209 billion euros-worth.