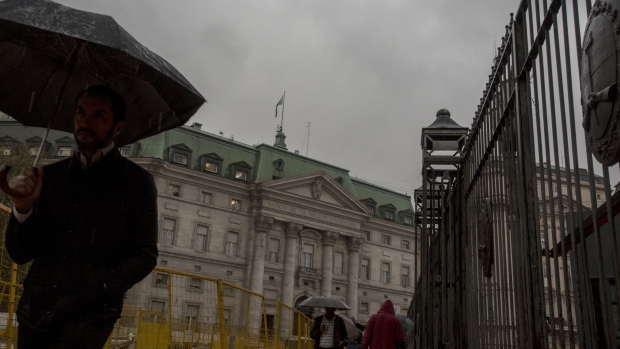 Pedestrians carry umbrellas while walking past the Argentine National Bank in Buenos Aires, Argentina, on Thursday, May 10, 2018. Argentine investors are shifting their focus to Tuesday's central bank auction of notes as a key test for President Mauricio Macri after the peso had its worst week since he came to power in 2015. , Bloomberg

The ratings company maintained its B2 rating for Argentine securities.

Gabriel Torres, a senior sovereign risk analyst at Moody’s, said Fernandez and other opposition candidates haven’t been clear about their intentions for renegotiating the nation’s $56 billion credit line with the International Monetary Fund. Torres said the IMF deal is critical because Argentina depends on the Fund for financing, and the deal is seen by markets as a “seal of approval” for Argentina.

“Renegotiating with the IMF can mean a lot of things, some could be irrelevant from a credit perspective, some can be very relevant,” Torres said in a telephone interview. “The reality is that the credit standing of Argentina really requires policy continuity.”

In its statement, the ratings company said it changed its outlook due to “increased uncertainty regarding the continued implementation” of policies that would address Argentina’s economic imbalances. It added there’s growing risk that this uncertainty hurts investor sentiment toward the country, which could “increase financial pressures and erode buffers.”

Torres said Moody’s decided to make its decision now because the presidential candidates were confirmed in late June, and Moody’s didn’t want to speculate beforehand on potential contenders. He said it likely won’t change its outlook until after the election.

“We’ll probably wait to see who wins, who do they name as key personnel and what are their first policy decisions,” Torres added.

To contact the reporter on this story: Patrick Gillespie in Buenos Aires at pgillespie29@bloomberg.net