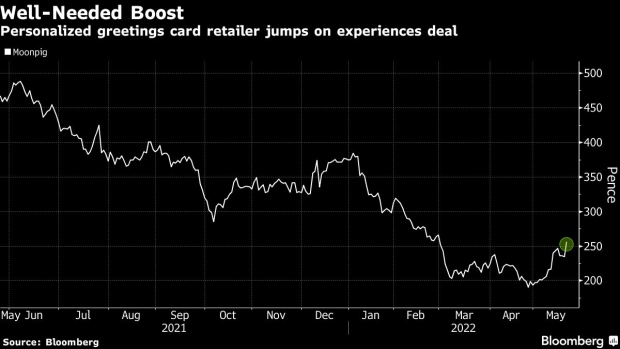 (Bloomberg) -- Online greetings card retailer Moonpig Group Plc announced the purchase of Smartbox Group UK Ltd as it taps into the growing demand for experience gifts over physical products, sending its shares up by as much as 14%.

London-based Moonpig will pay 124 million pounds ($155.8 million) for the owner of the Red Letter Days and Buyagift brands, it said in a statement Monday.

The U.K. gift-experiences market is worth about 6 billion pounds a year and is growing at a faster rate than total gifting as consumers increasingly gravitate toward presents such as days out, meals and activities, according to Moonpig.

“We see this as a good use of Moonpig’s strong cash generation - buying a growing, profitable, and high-margin asset,” Jefferies analyst Andrew Wade, who has a buy rating on the company, wrote in a note to clients.

Moonpig’s rise on Monday trimmed its year-to-date decline to 32%. The stock has slumped along with the broader technology sector amid concerns around rising interest rates. It lifted its medium-term Ebitda margin guidance slightly as a result of the deal.