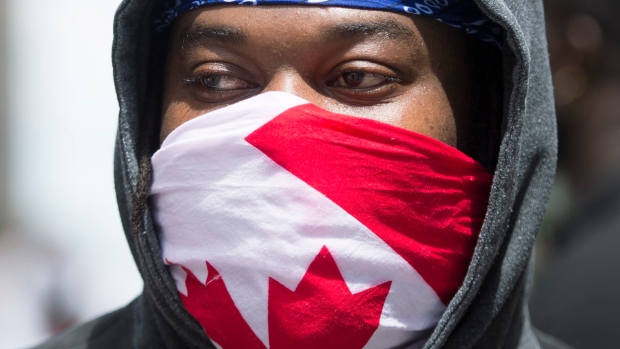 A man attends a demonstration calling for justice for the death of George Floyd and all victims of police brutality, in Montreal, Sunday, June 7, 2020. The Canadian Press/Graham Hughes

While many institutions have issued statements of support amid the rise of anti-racism protests across the globe, some activists say there’s still a long road ahead in quashing systemic racism in Canadian business – and that it needs to start with meaningful action.

“We need more action rather than words,” Sojourner-Campbell told BNN Bloomberg in a phone interview.

“[Companies need to] really look at how they are practicing, what they are saying they’d like to see in terms of the ending of anti-Black racism and supporting Black communities. They have to do the work in their own organizations.”

One business leader says making fundamental shifts in the workplace starts at the top.

“The fact of the matter is that this is everywhere and we have to look at all the areas in our society where anti-Black systemic racism exists, and really look at employment information in the C-Suite level,” Wes Hall, executive chairman and founder of Kingsdale Advisors, said in a phone interview.

Earlier this month, Hall announced the creation of the BlackNorth Initiative, with the goal of increasing Black representation in boardrooms and executive suites across Canada. The foundation includes other powerhouses in Canadian business, such as CIBC CEO Victor Dodig, Fairfax Financial Holdings Ltd. Chairman Prem Watsa and Cisco Systems Canada CEO Rola Dagher.

As business leaders acknowledge the work that needs to be done within their companies, federal institutions are looking to make changes as well.

Statistics Canada said it will start including information on race in its monthly employment reports starting in July after acknowledging the social, economic and labour impact of COVID-19 has not been equally felt by all Canadians.

Meanwhile, Canada Mortgage and Housing Corp. (CMHC) said it recognizes there’s a lack of diversity in its ranks and said it will start reviewing all of its policies and practices through a racialized lens to eliminate discrimination at the federal housing agency.

Many well-known brands are also starting to make changes to their business to become more inclusive.

Johnson & Johnson Inc.’s Band-Aid recently said it will launch a range of products in “light, medium and deep shades of Brown and Black skin tones that embrace the beauty of diverse skin.”

And Reddit co-founder Alexis Ohanian resigned from the company’s board of directors and urged for the company to replace him with a black candidate.

“I believe resignation can actually be an act of leadership from people in power right now,” Ohanian wrote on Twitter. “To everyone fighting to fix our broken nation: do not stop.”

Vancouver-based Aritzia Inc. also announced changes to address systemic racism and inequality from a corporate level.  The retailer said in a statement earlier this month it would invest $1 million to expand their diversity and inclusion program.

Canadian technology giant Shopify Inc. CEO, Tobi Lutke, meanwhile, has said that the company will donate a total of $1 million split between the National Association for the Advancement of Colored People Legal Defense and Educational Fund, the Black Health Alliance and Campaign Zero.

But despite good intentions, some businesses have faced backlash over their efforts.

For example, Calgary-based Righteous Gelato pulled its controversial Black Lives Matter frozen dessert less than a day after it was released.

The company said it had launched the product with the intention of donating part of the sales, but it was widely panned on social media for being insensitive.

It was only a matter of time before this egregious type of commodification of the struggle happened. I got to say though, if you’re going to be tone deaf and build a brand through controversy, go all the way. #BlackLivesMatter pic.twitter.com/vXNNzRscVI

While some companies have taken steps to combat systemic racism, diversity and inclusion strategist Alden Habacon said they are still only at the start of cementing real change.

“I feel like we're just at the beginning of the work. Most folks never get to the policy level,” said Habacon over email.

When looking ahead, Hall said that companies need to identify barriers in their own businesses.

In terms of how companies can actually address these barriers, Sojourner-Campbell said strategic policies will help.

“The intuitional change will come through a sustained set of strategic policies, procedural changes if they need them and investing in an outlined process,” Sojourner-Campbell said.

“Depending on the size of the organization, it may take a number of years and to phase in the necessary changes they have to make in order to live up to what they say they’re going to do.”

Sojourner-Campbell added that businesses need to think of sustainability and continue the work needed to address systemic racism once protests come to an end.

“I’m hoping that businesses are thinking about sustainability, because they’ve made their commitment publicly,” Sojourner-Campbell said.

“They (companies) need to continue, they need to update the public with what they’re actually doing with substantive plans on what they’ve done, and what they intend to do – and keep that dialogue going after the protests to bring real change.”