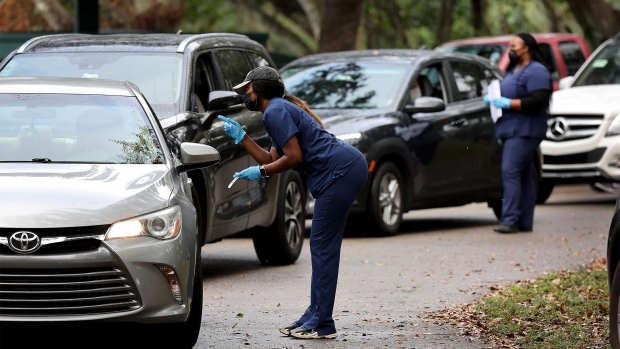 (Bloomberg) -- President Joe Biden’s administration is moving to boost availability of Covid-19 tests in the U.S. and shift the cost for at-home kits to private insurers as the omicron variant creates unprecedented demand.

The administration also is finalizing deals to buy 500 million at-home tests that it plans to send to Americans, while opening testing centers and working with Google to improve search results for site locations.

At many testing sites around the country, long lines persist.

At the same time, retailers are having trouble keeping at-home kits in stock and are raising prices. The White House last year first struck agreements with Walmart Inc., Kroger Co. and Amazon.com Inc. to sell tests at-cost for three months, a deal that has now expired. Walmart, for instance, now sells a two-pack of BinaxNOW tests made by Abbott Laboratories for $19.88, rather than $14.

What follows is a rundown of steps the Biden administration says are underway to expand test availability. What’s not known: whether the measures will be enough to meet demand as cases continue to spike.

Manufacturers plan to produce about 200 million at-home rapid tests for the U.S. market in January, up from about 50 million in the fall. That’s due to approved manufacturers increasing production, and new ones having their tests authorized. Abbott alone plans to make 70 million in January. The U.S. announced a fast-track approval process in October, a month before omicron’s emergence, for evaluating tests with the potential for large-scale manufacturing. Two won approval last month, bringing to 12 the number of at-home tests authorized in the U.S.

The U.S. will make available 500 million at-home tests at no charge, beginning this month, and launch a website for people to request them. It’s not clear how many tests will be available at first. The White House hasn’t ruled out ordering more.

Private insurers will reimburse for at-home tests beginning at some point next week, when a Biden administration rule is set to take effect. That will allow Americans to submit claims, and could spark an initial spike in demand. But it remains to be seen whether people will take advantage of the reimbursement as filing insurance claims can be a time-consuming and tedious task.

There are 20,000 free testing sites across the U.S., a number the administration said will grow, as well as federal testing sites in nearly a dozen cities. That, combined with free at-home tests distributed by some localities, is another source of no-cost test options. “The cost of getting a test should be free -- through reimbursement, through the 500 million, through the 20,000 sites for Americans who want free testing,” Biden’s Covid-19 response coordinator, Jeff Zients, said Wednesday.

The Biden administration says it worked with Google to refine searches so that people can type in “free COVID test near me” and results will spring up.