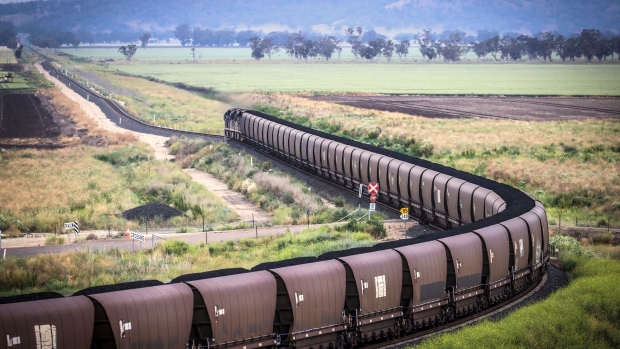 A freight train transports coal from the Gunnedah Coal Handling and Prepararation Plant, operated by Whitehaven Coal Ltd., in Gunnedah, New South Wales, Australia, on Tuesday, Oct. 13, 2020. Prime Minister Scott Morrison warned last month that if power generators don't commit to building 1,000 megawatts of gas-fired generation capacity by April to replace a coal plant set to close in 2023, the pro fossil-fuel government would do so itself. , Bloomberg

(Bloomberg) -- More Australian business leaders think the world is at a tipping point in responding to climate change, a survey showed.

Two-thirds of those questioned expect climate change to have a high or very high impact on their organization’s strategy and operations over the coming three years, according to the 2022 Deloitte CxO Sustainability Report released Monday in Sydney. The proportion saying that the world needs to act now rose to 74% from 52% just a few months earlier, the report showed.

Australia -- one of the world’s top suppliers of fossil fuels -- has committed to reaching net-zero emissions by 2050 but faces an uphill struggle to achieve that goal. Global investors have begun amping up pressure on coal-reliant nations to take action while there is a risk the country’s cost of raising capital will also jump without a clear strategy to curb greenhouse gases.

“If we are bold, decisive and co-ordinated, we can mitigate downside climate risks and help attract investment, create new jobs and support our regional communities,” Deloitte Australia Chief Executive Officer Adam Powick said in a statement. “This is a national agenda we must own and an opportunity we must seize.”

Nearly all the 102 Australian executives in the survey said their businesses are already experiencing consequences through the operational impact of climate-related disasters, costs of climate change mitigation, resource scarcity and regulatory uncertainty. They reported more pressure coming from regulators, customers and investors to act on the challenge.