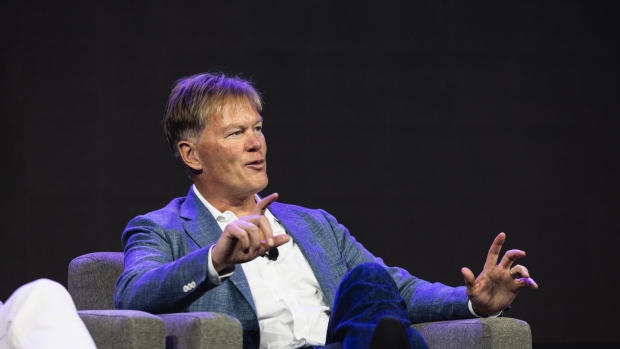 Dan Morehead, chief executive officer and co-chief investment officer of Pantera Captial, speaks during the CoinDesk 2022 Consensus Festival in Austin, Texas, US, on Friday, June 10, 2022. The festival showcases all sides of the blockchain, crypto, NFT, and Web 3 ecosystems, and their wide-reaching effect on commerce, culture, and communities. , Bloomberg

(Bloomberg) -- The Federal Reserve has for too long made grievous mistakes, and the repercussions are now reverberating in the crypto world, where there’s likely to be more “major meltdowns” to come.

That’s according to Pantera Capital’s Dan Morehead, who runs a crypto hedge fund and says the central bank has, via its policies in keeping overnight rates too low and in manipulating the bond market, made the worst policy mistakes the former Goldman Sachs Group Inc. bond trader has seen in 35 years of investing. Though the Fed is working on correcting the first slowly, it seems to not understand the latter, he said.

“This will be painful to unwind,” the hedge fund chief executive wrote in a note. “Unfortunately, the Fed still doesn’t seem to understand what they’ve done.”

Morehead, who started a Bitcoin fund when the token was still being ignored by many on Wall Street, says the “cascading collapse” of major digital-asset projects has helped expose the leverage in the system. At the center of the maelstrom are a number of hedge funds and lenders who have found themselves in hot water amid a digital-asset price slump this year.

Morehead lists the implosion of Terra, which he says had an unsustainable economic/stabilization model, and also mentions Celsius, which has poor risk-management practices. Embattled crypto hedge fund Three Arrows Capital was over-leveraged and could not meet margin calls. He calls these events “major meltdowns.”

“There are probably a few more to come in the next month or two,” he wrote. “Each bankrupt leveraged entity leaves a string of problems for their counterparties.”

He added that his firm put a large portion of its assets into Bitcoin in late May, and that once it’s “very clear” the market has found a floor, it will make sense to rotate out of that coin and into higher-risk, higher-reward alts.

“While we remain long-term bullish on many of these projects, during the crash we have taken on a larger Bitcoin allocation to reduce downside risk,” he said.

As for the Fed, its “manipulation” of the bond market is destructive. The central bank hadn’t, in nearly a century of its history, ever touched interest rates past the overnight rate, Morehead argues, and hadn’t loaned “almost-free money” to millions of individuals to speculate on houses.

Cryptocurrencies have suffered this year as the Fed has raised rates to combat rising prices. Digital tokens like Bitcoin have been highly correlated to stocks in this environment, with the two groups often moving in the same way during trading. Historically, Bitcoin’s correlation to stocks has tended to spike during major S&P 500 downdrafts, Morehead said, adding that he anticipates that relationship to come down in the near term.

“It may take a few more months for blockchain to decouple, but when the dust settles I can easily see a world where bonds, stocks, real estate, and everything with a discounted cashflow is down -- and blockchain, commodities, oil, gold, and other things that are truly not connected to rates, are up a ton,” he wrote.