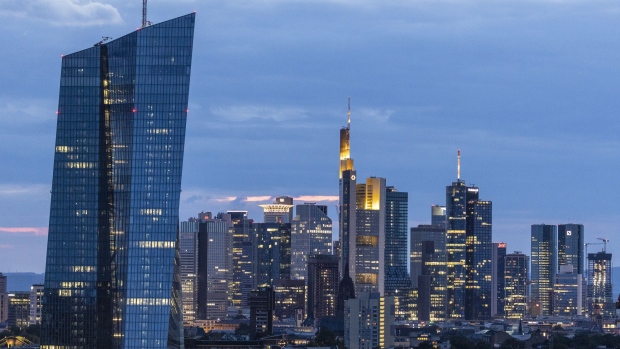 Two more European Central Bank policy makers weighed into the debate over whether the economy needs another strong blast of monetary stimulus, adding to signs that President Mario Draghi has some persuading to do if he’s to win a consensus for action.

After a week in which Governing Council members from Germany and the Netherlands said they see no need for a package that includes the resumption of bond purchases, Austria’s incoming governor, Robert Holzmann, described himself on Saturday as a monetary hawk. He said he’ll “probably express more criticism toward proposals for further monetary deepening.”

At the same time, Bank of Spain Governor Pablo Hernandez De Cos said the ECB should keep all options on the table to reinvigorate inflation and growth, including a relaunch of quantitative easing. He said QE complements measures such as interest-rates cuts and long-term loans, and so should be kept as an option to “maximize their effectiveness.”

With the euro-area economy battered by trade tensions and Brexit uncertainty, and the manufacturing sector already in a recession that risks spreading to services, ECB officials are widely expected to push their deposit rate further below zero on Sept. 12. Traders in money markets are pricing around 15 basis points of easing. Gauging how much QE is priced in is trickier due to a global bond rally that has flattened yield curves across the region.

Banks including Goldman Sachs, Nomura, and ABN Amro predict a new round of QE. Societe Generale said this week that it now sees the ECB cutting the deposit rate by 20 basis points to minus 0.6% and announcing that it’ll start buying 40 billion euros ($44 billion) a month of debt.

Hernandez De Cos, speaking in the northern Spanish region of Asturias, said the risks to growth in the euro-area economy remain “clearly to the downside.” Euro-area data on Friday showed show inflation at 1%, compared with the ECB’s goal of just under 2%. Finnish Governor Olli Rehn has said the outlook means the central bank must deliver a large package of measures.

Still, unemployment has held at 7.5%, the lowest since 2008, and a report this week showed economic confidence unexpectedly improving.

Dutch Governor Klaas Knot said in a Bloomberg interview on Thursday that the outlook isn’t yet weak enough to warrant the resumption of QE. Germany’s Jens Weidmann said speculation over a large stimulus package “doesn’t do justice” to the latest economic data, and his German colleague, Executive Board member Sabine Lautenschlaeger, said resuming QE should be a last resort.

Draghi’s successor Christine Lagarde, who will face European lawmakers next week before her official appointment in October, also spoke on Saturday but stayed away from monetary policy. Instead, she lavished praise on Angela Merkel at an honorary degree ceremony for the German chancellor.

That potentially strengthens a bond that could prove key in months to come as pressure mounts on nations such as Germany, which is on the verge of recession, to implement fiscal policy and alleviate the burden on the central bank.

--With assistance from Kristie Pladson.

To contact the reporters on this story: Jeannette Neumann in Madrid at jneumann25@bloomberg.net;Boris Groendahl in Vienna at bgroendahl@bloomberg.net;Piotr Skolimowski in Frankfurt at pskolimowski@bloomberg.net

To contact the editors responsible for this story: Fergal O'Brien at fobrien@bloomberg.net, Paul Gordon, Zoe Schneeweiss