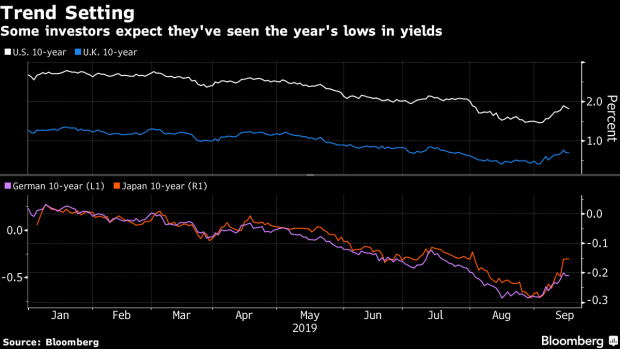 (Bloomberg) -- Bond bulls had a great August, as a ferocious rally drove yields in the world’s biggest markets to record lows. Now some investors say that’s as low as they’ll go.

The Federal Reserve will announce its next policy decision Wednesday, and the Bank of Japan on Thursday. Those events might normally stir up bond prices, even without this week’s upheaval in global money markets. But expectations for the extent of easing have dimmed, leading some to conclude that benchmark yields troughed a few weeks ago.

An aggressive sell-off this month has reversed much of the yield drop. For instance, 30-year Treasury yields sank to an all-time low of 1.90% in late August, from above 2.5% at the end of July. The yield is back up to about 2.25%. Investors are yanking money from Treasury exchange-traded funds, including the largest drain in five years from BlackRock Inc.’s iShares ETF focused on the belly of the curve. While some investors have simply taken to the sidelines, others are talking about a sea-change that could remove the froth from major bond markets.

He’s more confident than most in positioning for higher yields, because he sees improvements on several fronts: global growth, Brexit, Italy’s political problems and the trade war. Even the news of a drone attack on a Saudi oil facility this past weekend, which drove some defensive buying of U.S. government debt, hasn’t shaken his outlook.

Plenty of investors would disagree. Last month’s stampede left contrarians’ portfolios in tatters. Kathryn Kaminski, chief research strategist and portfolio manager at AlphaSimplex Group, warns against viewing this month’s jump in yields as a clear signal that the bull run is over.

Home on the Range

That said, she’s not calling for new lows. The investment firm’s managed-futures strategy, which she helps guide, trimmed its bullish Treasury wagers in recent months as rising volatility dimmed their risk-weighted appeal.

Her view that yields will stay within a relatively narrow range is a popular one for investors struggling to read a signal from the clamor of a possible oil supply shock, trade-policy brinksmanship and tweet storms from President Donald Trump.

Many Wall Street analysts this week highlighted their preference for a neutral stance on global rates, pending further information from the Fed on Wednesday, when it’s widely expected to cut rates by a quarter point for the second meeting in a row. But yields have been buoyed by expectations that Chairman Jerome Powell might push back on market positioning for at least one more cut this year, and potentially two in 2020.

Investors looking for a more-compelling bear case in government markets right now might be more drawn to the U.K. Mark Dowding, chief investment officer at BlueBay Asset Management, is positioning for gilt yields to climb because he suspects markets are overestimating the extent of easing by the Bank of England. The 10-year U.K. bond’s yield got as low as 0.34% early this month before shooting up to 0.68%.

From a bigger-picture standpoint, Dowding sees the U.K. market as an early mover in a broader theme. That is, the burden of supporting ailing economies will shift from central banks to governments, and the downward pressure on yields from monetary stimulus over the past decade will give way to upward pressure from increased government spending. That ought to break the gravitational pull on yields.

“We think we are seeing this globally: we’ve reached the limits of monetary policy and it’s time for fiscal policy to play a bigger role,” Dowding said. He sees the U.K. leading this shift, noting the spending pledged this month to cushion the economy from a potentially messy exit from the European Union.

“We could be close to completely ending the chapter on austerity,” he said. Lawmakers may be starting to recognize that with yields so low, “it’s creating a once-in-a-generation opportunity to deploy fiscal policy in a material way to invest in the economy’s long-term interests.”

In the U.S., where the government is already racking up deficits, PGIM Fixed Income’s Michael Collins says swelling debt sales are finally starting to weigh on Treasuries.

“We have a big underweight position in U.S. Treasuries even though the yields are attractive versus other government bonds,” the portfolio manager said. “There’s no reason to buy Treasuries which have an unending supply.”

But Mark Kiesel at Pacific Investment Management Co. says the push for more spending in the U.S. -- which he sees as bipartisan -- won’t necessarily spur sustainably higher yields. He says one of the more immediate reasons why the market won’t revisit the August lows any time soon is that Trump won’t want to push a hostile trade policy -- with all its attendant risks to growth -- all the way to the 2020 election.

“Trump wants to get re-elected, so you may see him do some things near-term that potentially keep the economy going,” Kiesel said. For this reason he says the 10-year yield can climb back to 2%, but at that rate, he said, “I’ll be buying.”

--With assistance from Liz Capo McCormick and Cecile Gutscher.

To contact the reporters on this story: Emily Barrett in New York at ebarrett25@bloomberg.net;Anchalee Worrachate in London at aworrachate@bloomberg.net

To contact the editors responsible for this story: Benjamin Purvis at bpurvis@bloomberg.net, Nick Baker, Mark Tannenbaum