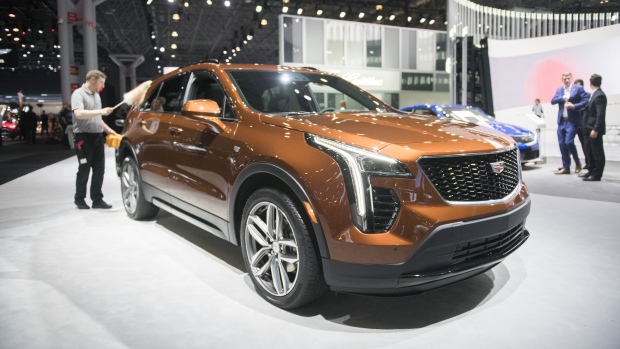 When Daniel Tijerina decided to trade-up from a Subaru Impreza sedan into a luxury brand, he didn’t look at a sporty coupe with speed aplenty or cushy sedans with sleek silhouettes. Instead, he drove home last month in a new Cadillac XT4, a plastic-clad crossover SUV.

What it lacks in handling and panache, the squat General Motors Co. (GM.N) sports utility vehicle made up for in attributes the 25-year-old credit analyst wanted: A car-like ride with high seating and touchscreen apps that make it easy to order a pizza en route to his Fort Worth, Texas-area home.

“It obviously sits higher, but it doesn’t feel any different from a car when it comes to driving and performance,” Tijerina said.

Those popular features help explain why SUVs now make up 60 per cent of luxury vehicle sales in the U.S., according to data from Edmunds, pushing aside the once mainstay sedan as the premium ride of choice for well-heeled auto buyers.

For generations, the gilded carriages for wealthy American households were large, comfy saloon cars from Ford Motor Co.’s (F.N) Lincoln brand and GM’s Cadillac. Those storied nameplates lost ground in more recent decades to Asian and European marques such as BMW AG, Daimler AG’s  Mercedes-Benz and Lexus from Toyota Motor Corp. (TM.N). But until recently those brands’ best-sellers have been sedans.

Sport utilities and crossovers first overtook sedans in the mainstream vehicle market five years ago. It took longer for luxury buyers to make a similar transition, but now automakers are racing to ramp up production to meet demand. Edmunds says the number of SUV options has grown to more than 60 different vehicles, double the number offered a decade ago.

“The luxury segment has adapted very quickly,” said Jeremy Acevedo, an analyst at Edmunds. “We’ve really seen them rush out fresh vehicles to the market.”

These days, sedans are lingering on dealer lots while crossovers and SUVs fly out of showrooms. Seven of the 10 best-selling luxury vehicles last year were crossovers or SUVs, according to Car and Driver magazine. Those include the Cadillac XT5 (No. 9), Mercedes GLC (No. 5) and Lexus RX (No. 2). Sports car specialist Porsche got nearly two-thirds of its sales from SUVs in 2018, and Aston Martin says the debut of its first SUV later this year is critical to the British automaker’s viability.

Years into the luxury SUV craze, analysts say the shift away from sedans shows no signs of reversing course, with dozens of more crossover and SUV launches in the pipeline. Bank of America Merrill Lynch analyst John Murphy estimates almost half of new or redesigned crossover utility vehicles introduced over the next four years are aimed at the luxury market.

“It might top out at some point not too far in the future, but it looks like there’s a little bit more gas left in the tank in the SUV transition,” Acevedo said.

Rising gasoline prices snuffed out a SUV boomlet in the mid-2000s, and a similar spike in pump prices today might have a dampening effect. Another possible diversion could be the growing popularity of electric motor-powered sports sedans.

Jim Navarro and his wife have owned several luxury SUVs going back more than 20 years, including an Audi, Land Rover and Range Rover. His latest is an all-wheel drive Volvo XC90, which the Las Vegas real estate broker purchased last month.

But the 55-year-old trendsetter is already thinking about being one of the first Taycan owners. “That might be our next vehicle in our family,” he said.