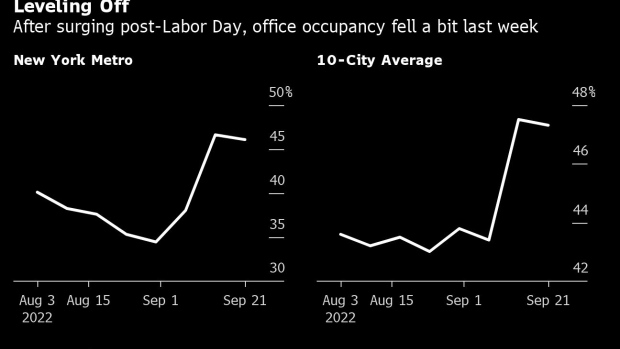 Workers at Goldman Sachs headquarters in New York, US, on Wednesday, June 15, 2022. The Securities and Exchange Commission is looking into whether some investments for the funds are in breach of ESG metrics promised in marketing materials, one of the people said. Photographer: Michael Nagle/Bloomberg , Bloomberg

(Bloomberg) -- After surging in the week following Labor Day, office occupancy dipped a bit in New York last week, suggesting that most everyone who plans to come back to their desk is already there.

New York offices were 46.1% full in the week ended Sept. 21, according to card-swipe data from Kastle Systems, down slightly from 46.6% the previous week. The trend was the same across the US, as the average occupancy in 10 big cities also eased off, from 47.5% to 47.3%. The only cities that saw real increases in workers returning were the tech hub of San Jose, where staffers are increasingly nervous about layoffs, and Houston.

Ridership on New York’s commuter trains that feed hundreds of thousands of workers from the suburbs into the city shows a similar pattern. On Sept. 21, the Long Island Railroad was at 71% of its 2019 average, the same level it hit on Sept. 14. Subway ridership was up slightly across those same two days.

The stall shows that flexibility has become a sticking point for white-collar workers in industries like finance, tech and media. It also illustrates that many bosses are reluctant to demand that all workers return all the time, for fear of losing them in what remains a tight labor market. Ongoing surveys of thousands of workers show that just under half of full-time employees who are able to work from home have a hybrid arrangement, where they’re in a few days a week. About 30% are on-site all week and roughly a quarter are fully remote.

Even on Wall Street, attitudes are shifting. While Goldman Sachs Group Inc., Morgan Stanley and JPMorgan Chase & Co. have long been pushing for more employees to come to the office, policies at other prominent financial firms speak to just how tricky it is to push for a full return. Earlier this month, Jefferies Financial Group Inc. asked employees to come in on a “more consistent basis,” but said it won’t check badge swipes and has “no issue” with staffers working from home from time to time.

Less stringent policies have contributed to New York’s office occupancy level remaining below 50%, despite the recent uptick. Coupled with news that technology giants Meta Platforms Inc. and Amazon.com Inc. have pulled back on planned expansions, it’s raised concerns about the future of the city’s office market.