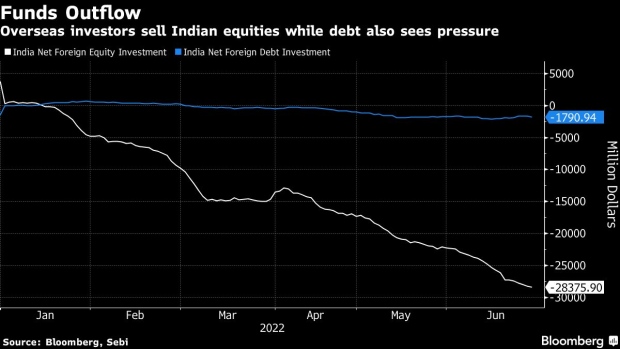 An employee counts Indian rupee banknotes at a Walmart Inc. Best Price Modern Wholesale store in Hyderabad, India, on Saturday, March 16, 2019. Walmart is making friends in India with the kind of competitors that it spent decades putting out of business in the U.S. -- mom and pop stores. These unlikely allies are part of the retailer's latest attempt to crack the country’s giant consumer market, taking on e-commerce arch-rival Amazon.com Inc. and Asia's richest man, Mukesh Ambani. Photographer: Dhiraj Singh/Bloomberg , Bloomberg

(Bloomberg) -- India’s ballooning trade gap and capital outflows are raising new risks for the rupee, just as the currency’s plunge to a record low adds to inflation woes.

“India’s external balances are deteriorating,” economists at Goldman Sachs Group Inc. wrote in a note Thursday, citing the terms-of-trade shock from higher commodities prices and weakening global growth. “Going forward, the trajectory of the rupee is likely to be pushed weaker versus the dollar on account of the deteriorating external balances.”

While the Reserve Bank of India has begun raising rates, which usually supports currencies, the moves also deflate the domestic stock market, and can accelerate rupee-weakening outflows. Meanwhile, demand for dollars is rising, further pressuring the currency and forcing the RBI to dip into its reserves pile to support it.

The central bank says the risks are so far manageable and the external sector is “well-buffered to withstand the ongoing terms-of-trade shocks and portfolio outflows.”

The following four charts take a deeper look at the challenges from India’s external finances:

A shortfall in India’s current account -- the broadest measure of trade -- will probably widen to 2.9% of gross domestic product in the fiscal year ending March 31, according to a Bloomberg survey in late June, nearly double the level seen in the previous year.

“The current account deficit widening has been relentless,” said Rahul Bajoira, an economist with Barclays Plc in Mumbai. “The broad-based increase in commodity prices is likely to keep the deficit sticky in the near term and, along with capital outflows, exacerbate the external financing requirements.”

If it starts to approach 4% of GDP, policy makers would need to take both fiscal and monetary steps, he said.

India’s foreign exchange reserves, which can cover about 10 months of imports, have slumped more than $50 billion from a peak in September to $587 billion in the week to June 17 as the RBI seeks to stabilize the currency and importers seek more dollars for costly energy imports.

The RBI is fighting on several fronts to slow the rupee’s decline, while its stated stance is that it intervenes to curb currency volatility and not influence its direction. Nevertheless, the RBI has spent $18 billion in the spot market to support the rupee between January and April, latest data from the central bank showed.

India’s trade deficit widened to an all-time high of $24 billion in May after the nation’s import bill almost doubled because of a surge in global crude oil prices. Meanwhile, exports slowed as Russia’s invasion of Ukraine and tighter monetary policies globally weigh on growth.

Foreign investors have pulled out more than $32 billion from Indian equities in the last one year, making it the worst performer in Asia after Taiwan. There has been an outflow from bonds too, placing India just behind Indonesia and Malaysia.