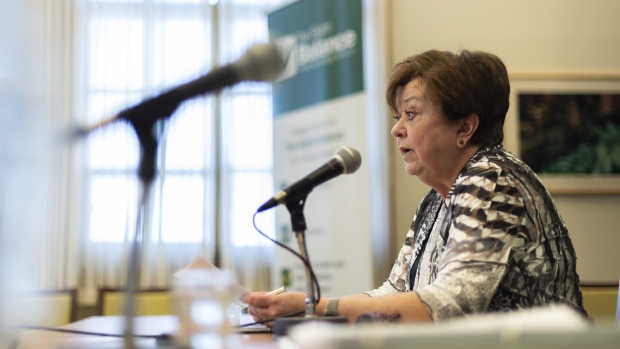 Saskatchewan Finance Minister Donna Harpauer arrives to a morning press conference during Budget Day at Legislative Building in Regina, Saskatchewan on Wednesday March 20, 2019. Unionized workers at six Saskatchewan Crown corporations and one Crown agency have voted in favour of a strike mandate to back demands for a new contract. , THE CANADIAN PRESS/Michael Bell

REGINA -- Unionized workers at six Saskatchewan Crown corporations and one Crown agency have voted in favour of a strike mandate to back demands for a new contract.

The four join SaskTel, SecurTek, and DirectWest in a position to legally strike.

Unifor says the government's mandate of a two-year wage freeze for public-sector workers is a sticking point.

It says if a collective agreement is not reached by next week, job action will begin at SaskTel on Sept. 30.

Finance Minister Donna Harpauer says in an emailed statement that Crown agencies have contingency plans in the event of a strike and will use management staff to continue operations.

The seven agencies employ between 4,300 and 4,400 people. Unifor said the wage freeze is an "insulting monetary package" for them that will almost certainly result in job action if no flexibility is shown.

The union also said some progress has been made on non-monetary items but a top priority -- the reduction of contractors used by SaskTel -- remains an outstanding item.

Unifor national president Jerry Dias is expected to be in Regina next week to join negotiations with all seven Crowns.

Harpauer said legislation is in place to ensure that essential services will continue to be provided to the public.

She also said the government respects the collective bargaining process, including the right to strike.

"We encourage all parties to negotiate in good faith at the table." (CJME, CTV Regina, CJWW)