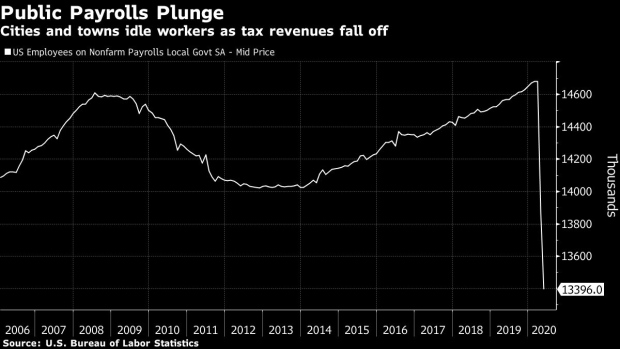 (Bloomberg) -- In the last two months, states and cities have cut more jobs than they did after the last recession.

Even as businesses hired employees back as much of the nation started reopening, the number of workers on state and local government payrolls fell by 571,000 to 18.3 million in May, according to U.S. Bureau of Labor Statistics data released Friday. That pushed the number of job cuts to about 1.5 million over the past two months, roughly twice as many as were ushered in after the last economic contraction over a decade ago.

Many of the job losses may be reversed when idled employees are called back as states reopen schools and their economies. But the steep cuts underscore the deep financial strain on usually slow-to-act states and cities, which are facing massive budget deficits after surging unemployment and business closures decimated their tax collections.

“The main take away is that this is happening because of intense shortfalls on the state and local levels,” said Wesley Tharpe, deputy director of state research at the Center on Budget and Policy Priorities. “A lot of the decline we may be seeing may be furloughs, but without additional aid from federal policy makers a lot of those furloughs will become permanent layoffs because states have to balance their budgets.”

Most of the public sector losses where from schools with 373,200 jobs cut last month, which are likely to reverse when students return to classrooms. Outside of education, states cut 20,700 jobs and local governments eliminated 176,900 positions.

Such job cuts, if maintained, could exert a drag on the recovery. States alone are expected to face a $765 billion shortfall over the next three years based on projections by the Center of Budget and Policy Priorities. U.S. cities and towns are projected to lose about $360 billion of revenue through 2022, according to the National League of Cities.

Michigan is requiring state employees to take two days off every two weeks from May 17 to July 25, in order to cut payroll costs by $80 million. The state is expecting a budget gap twice what it suffered during the last recession. New Jersey may have to cut half of its 400,000 state and local employees if the federal government doesn’t help make up a $10.1 billion revenue shortage through June 2021, Governor Phil Murphy said.

Congress hasn’t passed direct aid to states and cities to address their budget shortfalls, with a Democrat-backed plan to provide some $1 trillion stalled.

“It’s going to be a very incomplete recovery, even at the end of 2021, if we don’t deal with the state and local sector,” said Josh Bivens, director of research at the Economic Policy Institute, in an interview this week.