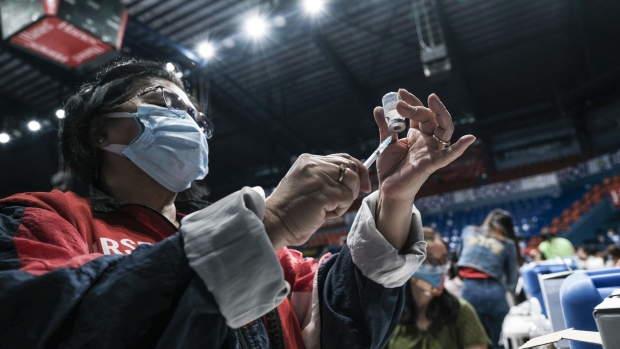 A health worker prepares a dose of the Moderna Covid-19 vaccine at a vaccination site inside a gymnasium in San Juan City, Metro Manila, on Dec. 28, 2021. Photographer: Veejay Villafranca/Bloomberg , Bloomberg

(Bloomberg) -- More than 10 billion doses of Covid-19 vaccine have been administered across the globe, according to the latest tally from the Bloomberg Vaccine Tracker.

The total is more than enough to give a dose to every person on Earth. But the milestone hides substantial inequality: Just over 13 months since the first vaccines went into arms, many wealthy, developed nations have achieved deep levels of vaccination across their populations. Many less-wealthy places, particularly in Africa, have not.

The wealthiest 107 countries in the world -- including China, the U.S. and Europe -- comprise 54% of the global population, but have used 71% of vaccines. Less wealthy places such as India, much of Africa and parts of Asia make up almost half of people on Earth and yet account for less than 30% of shots given.

Much of that inequality is the result of a vaccine campaign that began with rich countries putting themselves at the front of the line early in the rollout.

There are signs that the rest of the world is finally catching up. The World Health Organization has set a goal of vaccinating 70% of the global population by the middle of 2022. At the current pace, more than 30 million doses a day are being given -- enough to get a first dose to 75% of the population in the next four months, according to an analysis by Bloomberg.

Even as the pace of shots has picked up, the world has had to recalibrate its expectations around vaccines. While many people hoped the inoculations would end the pandemic, new variants and the fading of protection from infection mean that cases have continued, and even surged, in highly vaccinated places.

But for the vaccinated, those infections have proven far less consequential. A U.S. Centers for Disease Control and Prevention study released Jan. 21 showed that people who had received the primary series of vaccine and a booster dose were well-protected against hospitalization or death.

Similar trends around the globe have allowed the loosening of many of the restrictions that marked the first two years of the pandemic. New therapies, such as pills and infused antibody treatments, have also helped lower the risk of an infection, at least for those with access to the drugs.