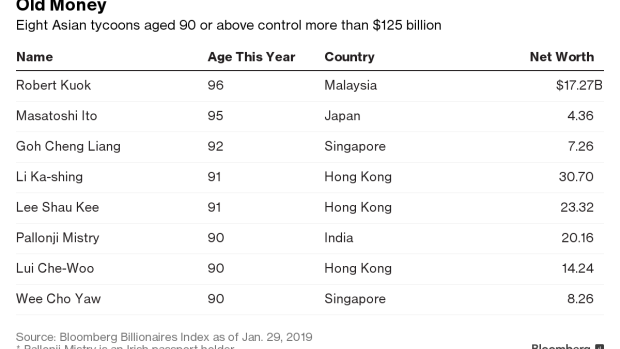 (Bloomberg) -- It’s been a mournful start to 2019 for two of Asia’s richest families.

Eka Tjipta Widjaja, who began as a coconut and palm-oil trader at age 15 before building a multibillion-dollar empire in Indonesia, died Saturday at 98. A week earlier, Henry Sy, a shoe salesman who became the wealthiest man in the Philippines, died at 94. Their combined fortunes exceeded $16.5 billion.

It’s no coincidence that the world’s richest people are also some of the oldest as it can take a long time to amass extraordinary wealth. About a fifth of the 500 people on the Bloomberg Billionaires Index are at least 80 years old, and 21 are nonagenarians, including eight from Asia with a combined net worth of $125 billion. That’s setting the stage for one of the most concentrated transfers of wealth in history.

"More and more families are thinking of succession," said Peng Qian, associate director of the Tanoto Center for Asian Family Business and Entrepreneurship Studies of Hong Kong University of Science and Technology. "We expect huge demand from Asia’s richest for private wealth-management services in the next few years."

When a billionaire dies, it can go at least two ways. An orderly split of assets or a battle royal among infighting heirs.

Sy attempted to adopt the first approach. He was worth $7.2 billion when he died after giving stakes in his SM Investments Corp. to his six children more than a decade ago, making all of them billionaires.

Li Ka-shing retired from CK Hutchison Holdings Ltd. and CK Asset Holdings Ltd. last year, with his son Victor taking over the conglomerate. He recently brought in his 23-year-old granddaughter Michelle Li to the board of Chesterfield Realty Inc., a family-controlled unit of CK Hutchinson Holdings.

For other scions of ultra-wealthy families, it can mean intense struggles for who will take control. Stanley Ho, 97, split most of his fortune among his wives and children in 2011 to settle a family dispute, but members of Ho’s family are still embroiled in a decade-long battle for his Macau casino empire.

--With assistance from Pei Yi Mak.

To contact the reporter on this story: Venus Feng in Hong Kong at vfeng7@bloomberg.net

To contact the editors responsible for this story: Pierre Paulden at ppaulden@bloomberg.net, Peter Eichenbaum, Steven Crabill